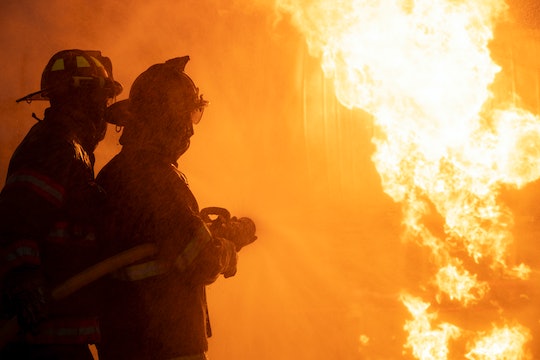 Phillip Blanks was heading over to a friend's house for an early morning workout when encountered an apartment complex up in flames. In a true act of heroism, a viral video captured the moment the former football player and marine catching and saving a toddler after he was thrown from the burning building.

When Blanks arrived at his friend's apartment complex in Phoenix, Arizona on July 3, he saw that there was a third-floor apartment in flames and told CBS News affiliate WWMT that he heard people screaming that there were kids in the apartment.

A 3-year-old boy was thrown from the balcony in an attempt to save his life, and when Blanks he saw the little boy "twirling like a helicopter" heading for the ground, he sprang into action. "I saw another guy was standing there ready to catch the boy, but he didn't look like he was going to do it, so I stepped in front of him," Blanks told WWMT. "The way I caught him damaged his foot, but the most important thing is his head was safe."

The video shows Blanks catching the 3-year-old boy — who AZ Family identified as Jameson — and cradling him to his chest as he ran with him to safety. AZ Family reported that the individual who threw Jameson to safety was believed to be his mom, Rachel Long. Long was reportedly on fire and rushed back into the apartment to save her daughter, 8-year-old Roxxie, who she threw to another bystander, according to CBS News. Sadly, Long did not survive the fire herself, according to ABC 15. A GoFundMe page has seen been set up to support the family.

Blanks was a wide receiver who played for the Saddleback College football team, according to Sports Illustrated, as well as serving in the U.S. Marines for four years. While there are many on social media who are commending him as a hero, he disagrees. "The mother, she is the real hero of this story because she made the ultimate sacrifice to get her children out," Blanks told ABC News 7.

Blanks also noted that there were plenty of strangers on hand who wanted to help. After he saved 3-year-old Jameson, he told AZ Family that there was a person standing by with their car door open to lay him down, and someone else offered a wet sheet to ease the toddler's burns.

It was a tragic day for the Long family, but without the help of Phillip Blanks and other bystanders, it could have ended so much worse. To support the Long family during this difficult time, you can donate to a GoFundMe page that's been set up to help with medical expenses for Jameson and Roxxi.