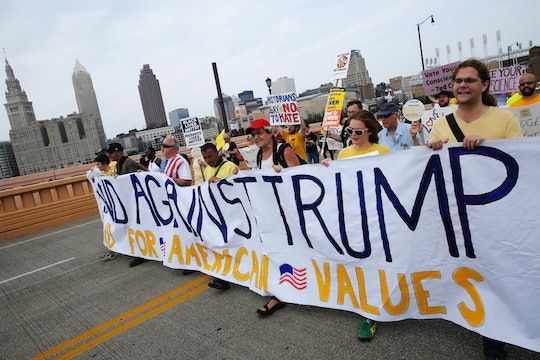 Videos Of RNC Protesters Getting Arrested Show Tensions Are High

The Republican National Convention in Cleveland is winding to a close after four tumultuous days, and it looks as though the situation isn't about to get any easier. Tensions were running high between police and protesters outside the Convention, and at least 23 people have been arrested by the Cleveland Police Department by Thursday morning. Some videos of the RNC protesters showed people clashing with local police enforcement agents, despite having come through a week of peaceful demonstrations where most groups were careful to follow the city's designated routes for protest marches.

The demonstrations have been well-organized, and much of them are positioned to rally against Republican Presidential candidate Donald Trump and what detractors consider to be his racist campaign platform. Some of the groups that applied for permits to congregate and protest were "The People Fight Back/March Against Racism," "Stand Together Against Trump," and a local Libertarian party which supports Libertarian candidate Gary Johnson.

More than 200 law enforcement officials were on scene to contain any acts of violence, on foot and on horseback. While most of the tension seemed to be relatively contained initially, Cleveland Police Chief Calvin Williams told reporters that issues arose when Joey Johnson, a member of the Revolutionary Communist Party, reportedly set the American flag on fire and ended up setting himself and others on fire in the process. Johnson and others were taken into custody.

According to Sunsara Taylor, another member of the party who was present at the time, there was never any danger.

"He was never on fire," Sunsara Taylor said. "The police attacked this, suppressed this."

The thousands of protesters came from all walks of life, from bikers to anarchists, pro- and anti-capitalists, and even some anti-Muslims joined the crowd. There were at least 150 protesters carrying signs through the crowd with messages that read, "Ban All Trumps, Not Muslims," and chanting "Love Trumps Hate".

According to The New York Post, there were just minor skirmishes between anti-Trump protesters and conservative religions groups before the flag-burning incident on Thursday. Two officers were injured during the incident, and demonstrators were charged with failure to disperse, assaulting an officer, and resisting arrest.

Some of the protesters maintained that the police used the flag burning as a convenient excuse to arrest people, despite the fact that the right to burn flags is protected by the First Amendment of the Constitution.

Local members of the National Lawyer's Guild arrived at the scene on Thursday to represent protesters who had been arrested.

"Despite the fact that charges were released to the media this morning, the Court has not received the charging paperwork, and the court hearing has been delayed. These individuals were arrested over 24 hours ago and remain in custody in the City and County jails," the lawyers said in a statement. "We are concerned that individuals' First Amendment rights are being chilled, and we are prepared to file writs to have individuals released who are being illegally held in jail."

The protests are expected to continue throughout the last evening of the RNC. For now, it looks like the remainder of the election season will likely be a bumpy ride.