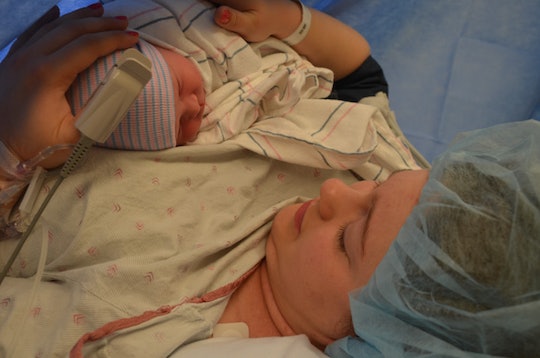 Sometimes, to get something really wonderful, you have to endure pain, and few understand that more than a laboring mother and her obstetric anesthesiologist.

“The thing that’s so wonderful about labor and delivery is you get to be present in such a special moment in a family’s life,” says Dr. Paloma Toledo, assistant professor at Northwestern University and an obstetric anesthesiologist. “You obviously have to make a mom feel comfortable, but you also get to partake in the joy when she sees her baby for the first time. So being an anesthesiologist checked off all the boxes for things I wanted in my career.”

There’s never a typical day in labor and delivery, especially where Dr. Toledo resides, at Northwestern Hospital in Chicago. One of the largest delivery hospitals in the country, somewhere between 30 and 40 women give birth there every day. There are days that go by calm and uneventful, and then there are the days where Toledo can’t go an hour without intervening in an emergency. “It’s part of the fun and challenge,” she says, “You show up for work and you have no idea how your day is going to go. You don’t know if you’ll be running around, or if it’s going to be almost relaxing. It’s so variable.”

For a c-section birth, the goal is for the mother to be awake and be able to see her baby when they’re born.

Whatever way a baby comes into the world, it’s Toledo’s job to make sure they get there safely while looking after the mother. “Our role in a vaginal delivery is to place that epidural and to ensure she’s able to experience her labor in the way that she wants and still move around,” Dr. Toledo explains. For a c-section birth, the goal is for the mother to be awake and be able to see her baby when they’re born.

For a lot of people, Toledo’s presence with them can be the scariest moment of their whole pregnancy and delivery, because they really aren’t too keen on having a big needle placed in their back. But, as Toledo explains, some moms just have a huge wave of relief seeing her walk into their room. So much of a mom’s perception has to do with how much she’s thought about labor epidurals before even arriving onto labor and delivery. There are a lot of misconceptions about anesthetic pain control, something Dr. Toledo has written extensively on. Patients are “scared they’re going to be paralyzed, or if they’re going to have chronic back pain, but they need an epidural because they can’t take the pain anymore. And for those women, when they see [me] they’re really scared.”

One of the biggest roles anesthesiologists have to play is that of educator. There is a lot of explanations and answering questions so that patients feel comfortable with Toledo and her team. She’s relying on her patients to trust her when meeting her for the first time to do something for them that’s rather complicated. “As the anesthesiologist, it’s on you to make them feel comfortable with you very quickly because you have the obstetrician that’s known them for a long time. We meet people the day of surgery.”

She acknowledges the personal nature of this encounter, wanting to be as unobtrusive as possible in order not to steal the mom’s show. “It’s a fine balance to walk as an obstetric anesthesiologist, but wow, it's so special to be there when people are having their babies.”

For many moms who have wanted an unmedicated or natural childbirth, facing a change in the plan can come with disappointment. There can be a lot of let down and the key to succeeding in the doctor-patient relationship is to not make moms feel like they have failed. According to Toledo, this is an important group of women to talk with, and one which many studies have been done on. “The ones [in the study] that had a change in plans tended to have more postpartum depression because there’s this loss of control. It’s hard for them, because maybe they didn’t plan on having an IV and now they have one, or they wanted a tub birth and now can’t deliver in the water. I think it’s just part of being a mom. It’s part of learning that you’re no longer completely in control of a situation anymore.” At the end of the day, anesthesiologists need to make a personal connection with patients and make them feel supported in whatever decision they made.

The most memorable moments in Dr. Toledo’s career are the ones where things just didn’t go very well. These were the moments where she bonded with her patients the most. Labor is supposed to be the most natural thing that a woman does in her life, they think. A mom should deliver her baby healthy, and then go home. When it doesn’t go that way, it can be scary and a woman is left trusting people she doesn’t even know to take care of her so she can go home with her baby.

Everything went from good and fine after delivering the baby, to all of a sudden we’re placing a breathing tube into them and doing chest compressions.

Dr. Toledo gives an example where a patient was losing a lot of blood after delivery. After talking to the patient and her husband about what was happening, Dr. Toledo reassured her that she was indeed safe and that she was in good hands. “You know,” she reflects, “walking [that patient] through that experience so it wasn’t overwhelming for her, I think those are the moments that stick out to me the most. If I was in that situation myself, I would be freaking out. Basically you want them not to lose all control and you’re freaking out together.”

There was also the patient who had a cardiac arrest during her routine C-section. “Everything went from good and fine after delivering the baby, to all of a sudden we’re placing a breathing tube into them and doing chest compressions. Ultimately,” Toledo reports, “the patient ended up being fine. She walked out of the hospital healthy with her baby and for situations like that, you have that sense of, Wow, I really saved your life!”

It’s not just her, she adds, it’s the whole team all working together during those emergency situations. As an anesthesiologist, it’s in those situations where she feels the most connection to the patient.

Dr. Toledo credits her own role as a mother in her success on the job. “I deal with patients that have a lot of fears about epidurals and I think, being a mom who had one herself, I am able to tell patients my own first-hand experience and that it’s not going to hurt them or the baby. The key to being a good doctor is listening to patients and making sure you’re giving them the care and experience they want,” she says, “For the majority of women, it’s that sense of relief and gratitude we provide that there’s an end to their pain in sight.”

More Like This
Pitocin Induction: What It Is & The Play-By-Play
This Is How Your Water Breaks During A C-Section
I Found Gender Euphoria In My Second Pregnancy
OB-GYNs On How The End Of Roe Changes How They Can Care For Us