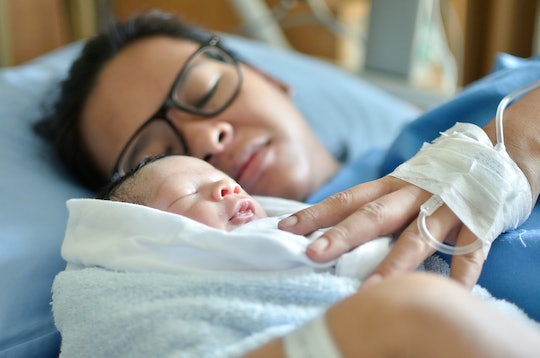 Documenting A Birth Isn't For The Faint Of Heart

There is extraordinary strength that comes out of the pain of childbirth and no one captures those moments like a birth photographer.

Erin McCain, birth photographer for erin and I photography, has a knack for capturing the most precious moment in a woman’s life. Looking back on her own photos of her son’s birth 12 years ago, she is reminded of the miracle that is bringing a child into the world. “You don’t really remember a lot of it when you’re going through it,” she tells Romper, “So I want those moms to be able to look back and see every stage of their birth that they didn’t really get to see, because you know, they’re in pain.” She laughs. “It’s just such an honor to be there. There’s just something about that whole experience that you get to enjoy with families. I love looking at the photos I took, so I can’t imagine what they’re feeling seeing them for the first time.”

It’s what she misses most about being pregnant herself: heading to the hospital, having a baby, and that drive home as a changed family.

Those moments in the hospital, delivering a baby that was just kicking from the inside, and being able to hold them — it’s fleeting. For many, it’s hard to remember the details completely. It’s where a birth photographer steps in and solidifies those moments to look back on that were forgotten.

Shooting a birth is so different from other forms of photography. There’s a certain vulnerability that comes when a camera is taken out in a labor and delivery suite that a photography studio can’t compete with. Dealing with the emotions in the room is a huge skill for these types of photographers. “Obviously, the parents are in a very emotional state when giving birth,” Erin says, “So you can’t get upset if they get upset.”

Some parents are nervous to have these photos taken because it’s a really vulnerable moment in their life — you see everything.

Maintaining composure in a sometimes stressful environment is not only essential to the job, but it’s so important to put the mother at ease. At times, it’s not easy having someone capture such a sensitive period. It’s understandable a mother or couple could have some qualms about the whole situation. “You can kind of play off of the way they’re acting,” she explains, “so I really watch that closely.” If a mom is showing that she may be feeling nervous or awkward, Erin will take a seat and spend some time just talking to her. Her first priority is the respect and dignity of the mom she’s working with. She explains to the mother that she is just here to capture all the moments.

“You just kind of naturally know what to do in the moment,” Erin explains. “Some parents are nervous to have these photos taken because it’s a really vulnerable moment in their life — you see everything. They’re emotional, they’re screaming, they’re saying words they don’t want anyone else to hear.”

Erin’s team are lifestyle photographers, which means they aren’t too into posing in their work; instead they like to capture the moments when the family isn’t even looking. In a birth, that may mean taking photos of parents hanging out, or watching TV, going about their business and not stopping to look at the camera and smile.

“We hide in the corner, we hide in different areas, to stay out of their way, but still capture those moments. It could just be of the mom there sleeping. It’s part of the whole experience. Sure there’s times we tell Dad, OK, look up smile, or have him kiss mom on the head, but they get to choose whether or not they like those photos.”

Getting to witness another woman’s birth experience touches Erin on a level she doesn’t get anywhere else. “So much of this experience is watching the dads,” she says, a smile evident in her voice, “It’s seeing the bond between them, and a dad doing anything possible to make his partner comfortable.” The best moment for her is when her clients meet their baby for the first time. It’s observing the way parents look at each other, a baby looking up at his mom, the little connections that occur. “I just remember the feeling myself,” Erin reflects, “I think it helps to be a mom doing this, because you know what you want in your photos. You know which moments will mean the most, so you tend to photograph those moments.”

As captivating as the birth process seems, it’s not without some issues. Birth is unpredictable and Erin sometimes has to roll with the punches — like the time a vaginal birth turned into a c-section and nursing staff and doctors refused to let her accompany the couple to the operating room.

“The parents were pretty upset because they really wanted us there, and of course we came into the room afterwards, but it was a couple hours later.” She adds, “Dad did take some of the birth photos though. I think we even gave him our camera to use while he was in there. He didn’t have the best camera to use, so we put ours on the setting it should be, and told him to take a few, to do whatever he wanted.” She chuckled, “He said, ‘Oh my God, I don’t know if I can do this,’ but you know what, he did.”

Customer service isn’t limited to retail and restaurants — when clients know they aren’t having the experience they intended, Erin is there to do what she can to make them happier.

It means the world to these parents, these photos, because the newborn stage doesn’t last long.

Her job doesn’t stop when she steps out into the waiting room either. According to Erin, her team could be out there for 10 minutes or five hours. She could be killing time as a mom gets her epidural, or because a much-needed nap is taking place. They stay busy by either offering to help in other ways, such as talking to family members waiting in chairs, and even getting some photos of family while they’re waiting for their loved ones. “For the most part, it’s mingling with the excited family members and listening to them tell stories about the parents-to-be.”

After their newest little client comes into the world, there’s a renewed energy as this hours-old baby is included in the family photographs. “It means the world to these parents, these photos, because the newborn stage doesn’t last long. These pictures are going to be there forever, and they can always look back on them,” she gushes. “I would always ask my mom if she had any photos of us, but no, you just didn’t do that stuff back then. Sure you have photos of you when you’re little, but we didn’t have birth and newborn photography, so it’s pretty cool we can provide this.”

Besides the parents, Erin is the first to meet a new baby, and it’s this moment, she feels, that bonds the family together, along with the photographer and that family. It can be the start of a new relationship and it’s why people continue on with her to photograph their family for the years to come.

“In a way, we become friends with our clients,” she says, “It’s pretty amazing that they trust us to be there, knowing their family members want to be there too, but they just really want these photos taken. It’s probably one of the best jobs in the world. To see families grow up and babies come into the world.”