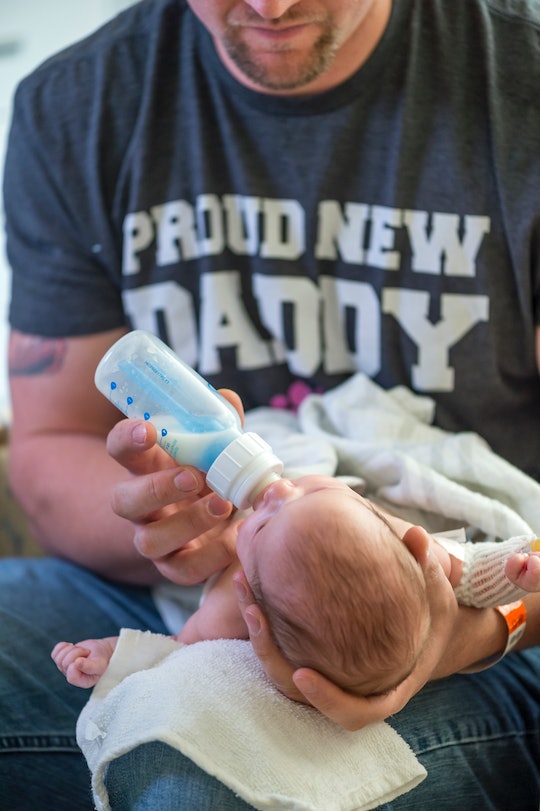 Just down the hall from the neonatal intensive care unit at Children’s Hospital Colorado you will find a the NICU milk lab. Children's Colorado is renowned, and so serious, that families from all over the Western United States move heaven and earth to have their infants there. While many NICUs deal primarily with prematurity, Children's Colorado treats neonates in need of major surgeries and exploratory treatments — babies with heart issues, and babies who can't breathe. It's not uncommon for families to spend months, or even years, of their lives there.

Becoming a mother in the NICU, amidst doctors and nurses and whirring machines, is very different from becoming a mother at home. Psychologically, there's the chronic stress and fear, and the persistent sense of displacement and powerlessness. However, there's one near-miraculous thing moms can do to help their babies recover faster, while beginning to bond deeply with them, and that's nourishing them with breastmilk — whether through breastfeeding or pumping.

Forty years ago, NICU mothers didn't have a chance to feed their babies their own milk, or to develop their milk supply, which will dissipate without use. According to NICU Awareness, kangaroo care in the NICU, with its emphasis on skin-to-skin contact and mother-infant bonding, has only been prioritized since the 1970s. These days, thanks to places like the milk lab at Children's Colorado, moms can pump and safely store milk in the hospital, with the help and advice of experienced technicians like Shelby Jarak.

Jarak works in what at first looks like a college science laboratory, all clean chrome spaces, industrial refrigerators, and thick notation binders. In fact, every nook and cranny is full of milk, carefully measured and labelled. Some of that milk comes to Jarak to be fortified with extra calories, calcium, or protein, she explains, in an interview with Romper. After a dietician determines a baby's unique needs, the milk-lab techs augment mom's milk with whatever means necessary. If a baby isn't yet well enough to take feeds, they'll meticulously store however much milk mom pumps.

Mothers care deeply about their milk, and what happens to it. Jarak says moms want to know exactly what fortifiers their baby is receiving, and how much of their own milk is in each recipe. Milk lab techs carefully, painstakingly account for every milliliter of mom's milk, so Jarak can tell them to the drop.

But one critical part of her job, Jarak says, is to support moms on what might be a strange, lonely road, and to motivate them when they feel discouraged.

"A lot of times [in the NICU] it’s all about the baby, and of course, the baby’s number one, but mom also doesn’t get asked how she’s doing, and how the process is going for her." But twice a day, a milk lab tech will visit her room in the NICU to see how pumping is going, feed the baby, and pick up milk. Better still, moms can visit the milk lab window, and check in any time.

"It’s a good opportunity for mom to take a little break, get out of the room, and just talk to someone who has a listening ear and is compassionate towards her situation."

These moms pump fiercely, because with a sick baby, pumping might be the only thing they can do. It's both about the present — seeing baby through a crisis of health — and the future: one of the most satisfying parts of Jarak's job is sending mom and baby home with a passel of stored milk.

"When they know that they’re providing something for their baby, and that they can go home and start breastfeeding, even in the NICU, being able to do that, it’s really an accomplishment," she says admiringly.

Feeding their baby, even in difficult circumstances, for these moms, is part of the process of becoming a mother. But dads get in on the transformation, too.

"It’s really cute to see how much dads get involved in the process," Jarak says. "They take over labelling the milk and bringing it down, and they fill out the deposit slip perfectly. You can really see them not only supporting moms, but fulfilling their role in being dads."

The milk lab is very serious about not wasting milk, and from careful freezing and refrigeration to meticulous measurement, they treat it like a precious fluid. When you think about what being able to feed their babies means to NICU moms, you realize how priceless it is. Jarak is a witness to struggle and determination, and to countless expressions of love.

Twenty years ago, moms who weren't supported in pumping might be unable to breastfeed their babies when they bring them home. But dedicated lactation support helps mothers establish a fulfilling connection, even after months of stress and trauma.

Editor's Note: A previous version of this article incorrectly named Children's Hospital Colorado; it has been updated.