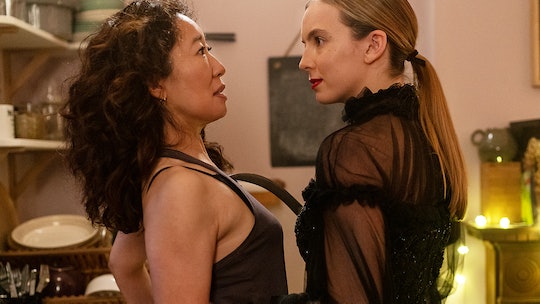 "Sometimes, when you love someone, you do crazy things," Villanelle said in the Killing Eve Season 2 trailer. Sure, but should I be worried that these words were uttered by a psychopathic assassin? Yes. But do I care? Not as much as I should. Villanelle's relationship with Eve Polastri on the BBC America hit series has been complicated at best. However, sparks have been flying since Season 1 and at this point, it's getting a little hard to ignore the sexual tension. Seriously, you could cut it with a knife and the "Villaneve" tweets from Killing Eve fans prove it.

Whether it's love or an overwhelming obsession, it's clear that Eve and Villanelle have fallen into... something. When Eve and Villanelle met in the show's first season finale, titled "God, I'm Tired," fans couldn't help but watch the duo together. Coupled with intimate scenes and a shocking stabbing at the end, Villanelle confessed that her obsession with the MI5 agent had a sexual component.

Speaking with Harper's Bazaar, Killing Eve producer Sally Woodward Gentle shared that the team spoke with a psychologist to help them explain what the stabbing means to Villanelle and Eve in the show's second season.

"It could raise a fury and a sense of revenge in her, or it could confirm everything that she thought, which is that there's this great intimacy between them, and now they're bonded," Gentle revealed. "It could confirm everything that she believed - that they have have a very special relationship. We play off both of those possibilities as we run through the series."

Of course, fans quickly picked this up when Killing Eve returned for its second season, which picked up immediately after the stabbing in the Season 1 finale.

That being said, Eve and Villanelle didn't reunite until the fifth episode of Killing Eve, titled "Smell Ya Later." And just like the first time, the reunion was dripping with excruciating sexual tension.

Nonetheless, the Killing Eve writers didn't give fans the physical gratification they had hoped for. Again in Eve's kitchen, Villanelle grabbed Eve by the waist and pulled her close. “Will you give me everything I want?” Villanelle asks. However, the two women don't kiss. Instead, they decide to work together to take down the Ghost.

But just because the writers won't give their viewers a hookup sequence between Villaneve, doesn't mean fans will will up on their ship just yet.

If I had to guess, there's definitely a red thread of fate between Eve and Villanelle on Killing Eve. But will the duo ever get together for an epic romance of their own? Although their relationship is dysfunctional, fans are ready for Villaneve to take it to the next level.