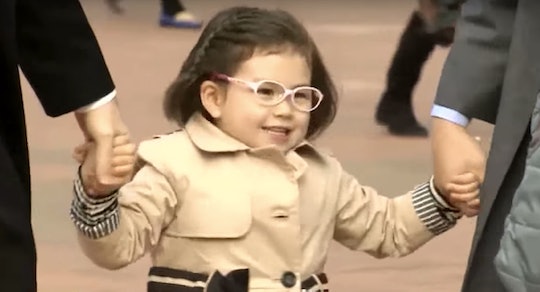 Viral BBC Family Gets Their Own (Adorable) Animated Show

Professor Robert Kelly is clearly a man comfortable with being upstaged by his children. During an interview with the BBC in March, Kelly's hilarious, adorable kids interrupted the live broadcast and stole the show. The video went insanely viral almost immediately. And now, it looks as though Kelly's kids might be ready to steal the show again: The viral BBC family are getting their own animated series, and their dad couldn't be happier about it.

Robert Kelly, an associate professor of international relations in the Department of Political Science and Diplomacy at Pusan National University , was just sitting down to a live interview from his apartment in South Korea with the BBC. This wasn't Kelly's first rodeo, as he later reported to The New York Times, so he (and his family, so he thought) knew the drill. His wife, Jung-a-Kim, was watching the interview from the living room, according to Kelly, and thought her children were with her. Unfortunately (or more to the point, totally fortunately for the rest of us) Kelly's daughter, Marion, caught a glimpse of her dad on the television and decided to go join him, bursting in through what her parents assumed was a locked door and bouncing around in the background while Kelly tried to keep a straight face. Then, in rolled her baby brother in a walker... then mom following with cat-like reflexes and the best sock slide since Tom Cruise in Risky Business. What ensued was comedy gold.

Since the interview aired on Mar. 10, it has been viewed millions of times all over the world. It has sparked debates on social media (particularly when some people made the erroneous, and downright offensive, assumption that Kelly's wife must be the nanny because she's Asian), prompted discussions about the nature of life/work balance, and now... now it has inspired an animated series.

The Adventures of Mina and Jack, created by Hans House, was "inspired by the adorable viral BBC video." As its title suggests, the series follows two young children named Mina and Jack; Mina in particular, with her impish grin and on point eyewear, will look especially familiar. The two are being hailed "a mischievous duo who can't help but get into trouble... and on the news."

Professor Kelly, already a man who knows how to roll with the punches, tweeted his approval of the YouTube series on Tuesday.

According to a press release by the couple behind Hans House Productions, Lauren Martin and Jarryd Mandy, the concept came to fruition after they watched the viral video and realized the best way to capture the essence of the piece was through animation. As Lauren Martin put it in an email to Romper:

I'd just like to say that I probably watched the video over 100 plus times and couldn't get enough of it. It was just such a perfect moment. I wanted to capitalize on that perfect moment to make something that lives beyond just the viral video.

As for the Kelly family, as ever, they were willing to roll with it. Professor Kelly told Hans House Productions:

I thought it was so cute. My wife and I both laughed. They made me look suitably dorky.