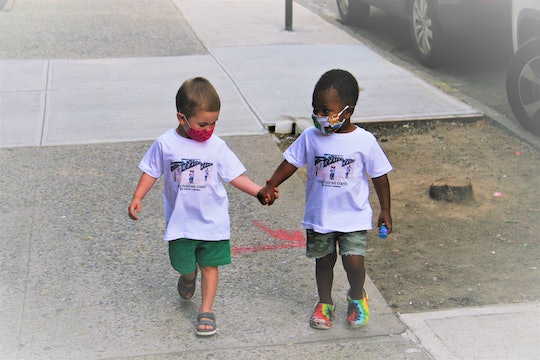 Not only did two little boys from New York City captivate the internet after a video of them running to hug each other went incredibly viral last year, now those adorable hugging toddlers are starring in a campaign that aims to help raise money for an organization working to combat racism.

The two young besties, Maxwell and Finnegan, were just 2 years old when the video of them running in for a hug went viral last September. The sweet video of Maxwell, who is Black, and Finnegan, who is white, recirculated in June in the aftermath of the police killing of George Floyd, sparking conversations about important issues like racism and racial equality.

"It's great to spread the love and to show people that kind of love and beauty in the world," Maxwell's dad, Michael Cisneros, told CNN affiliate WPIX in 2019 when the video first went viral.

And now the two boys are the stars of a new fashion campaign for the brand BOY MEETS GIRL. "Spreading love over hate has been my underlying mission and bringing together communities to open the conversation and to learn is what we all need to be doing right now," Stacy Igel, BOY MEETS GIRL fashion designer and creative director, said in a statement to Romper. "We need to show up and stand together."

The campaign aims to help raise money for From Privilege To Progress — "a national movement to desegregate the public conversation about race" that was started by the two women who filmed a video of two Black men getting unjustly arrested for sitting in a Philadelphia Starbucks in April 2018 — by selling t-shirts and sweatshirts that have images of Maxwell and Finnegan's original video printed on them. "Together We Stand" is written under the photos on the clothing, which Finnegan and Maxwell's families helped Igel develop. A portion of sales will be donated to From Privilege to Progress.

"As a father of a Black son, I am beginning to know the fear that parents of Black children have," Cisneros said in a statement about the campaign. "Maxwell is young now, but to think about him and the other Black children not returning home because of the color of their skin is indescribable. We were fortunate enough to have a video that gave us a platform to use for change that is desperately needed."

Finnegan's mother, Erica McKenna, said in a statement that she hopes the shirts encourage "unity among people of all races, and for those of us who are privileged, it should also serve as a call and reminder to speak up against racism, in all of its forms."

You can buy these items on BOY MEETS GIRL's website. A white adult sized hoodie with this powerful print costs $59, while an adult sized t-shirt costs $29. Your little one can emulate Maxwell and Finnegan's style with a kid's sized t-shirt from the collection for $25.

More Like This
13 Moving Photos Of Kids, Families, & More Protesting Abortion Rights Across The Country
Reddit Is Stunned By Mother-In-Law Trying To Breastfeed Her Granddaughter
This Mom Gave Birth On Graduation Day, So The University Brought Her Degree To Her
This Underwear-Clad Mom Saved Her Pet Goose From An Eagle While Breastfeeding