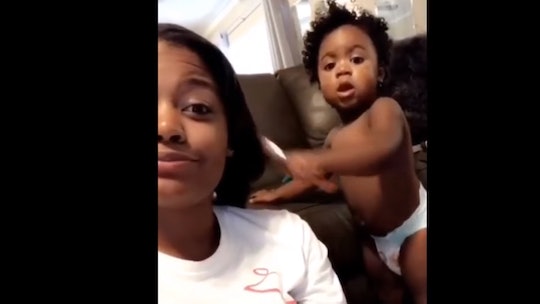 SeaWorld Hooked Up The 'Salon Talk' Baby With VIP Tickets

Not too long after 1-year-old Jayne Robinson took over the internet with the adorable video of her chatting with her mom while brushing her hair, this sassy toddler — also known by social media as “salon talk” baby — got the VIP treatment at SeaWorld after the amusement park saw the viral post. In the original post on Facebook, Jayde's mom, Kerry Robinson, told the little one that she had SeaWorld tickets for military families and her daughter's shocked reaction was clearly too cute of an opportunity to pass up. And according to her mom, Jayde had an absolute blast petting dolphins, waving at orca whales, and just hanging out with her parents.

“We had an awesome time,” Robinson told HuffPost, which added that the theme park sent their family free VIP tour tickets for Mother’s Day.

She continued, “This is the second time Jayde and I have been on Mother’s Day. Last year she couldn’t walk or talk much so this experience was amazing. Jayde wanted to get into everything.”

On Wednesday, SeaWorld shared a video of their experience on Twitter. "It started with a little #SalonTalk & turned into the experience of a lifetime!" it wrote on May 17. "The moment you’ve all been waiting for… Jayde does #SeaWorld!"

Watch Jayde having fun at SeaWorld and soaking up her viral fame below:

Robinson first posted the viral video on Facebook in early May and it's since amassed more than 19 million views and thousands of comments on the site. And, really, that number is no surprise because Jayde's mastery of girl talk is too cute to handle.

"Can you believe he tried to ask me to get up first to get your breakfast," Robinson said to Jayde in the video. "Girl, he crazy.”

"He crazy," she responded to her mom.

The 1-year-old continues to brush her mom's hair while chiming in with adorable phrases like “and then what happened,” “he tripping, right,” “daddy’s tripping,” and “girl…”

Watch the super cute exchange below or check out the full video over on Robinson's Facebook page.

Considering how many times Robinson's video has been shared and watched, the internet is far from over Jayde's 15 minutes of fame and would certainly welcome any additional salon talk clips.

And who knows, the next viral gem might come sooner than we think. Robinson did write in early May that she and Jayde would be starting their own show and she also commented on a recent Facebook video that The Ellen DeGeneres Show had contacted her as well. But until then, watching Jayde have a blast at SeaWorld and the original video will totally suffice for now.