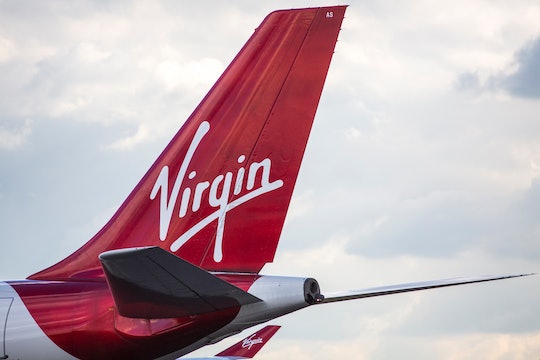 When it comes to dress codes at work, most companies either have a specific uniform or something along the lines of a "business casual" clothing requirement. Sure, they can be a pain sometimes. But I get it — when you're at work, you're an employee representing a company. And that business wants to ensure that its employees are consistently presentable. But when it comes to mandating that workers to wear makeup? That's where I draw the line. As it turns out, Virgin Atlantic no longer requires makeup for female cabin crew members — and it's about time. Romper has reached out to Virgin Atlantic, but did not immediately hear back.

As PopSugar reported, Virgin Atlantic is widely known for the red lipstick (and matching uniforms) worn by its female employees — in addition to their full faces of makeup and fancy hairstyles. Well, it seems the airline has recently updated its dress code policy. Because now, makeup is merely an option instead of a requirement for female cabin crew members and ground employees. (Can I get an amen?) Additionally, pants are now available as an option for women and will automatically be provided along with the skirts.

"Our world-famous red uniform is something all of us at Virgin Atlantic are incredibly proud of. As an airline, we have always stood out from the crowd and done things differently to the rest of the industry," a spokesperson for the airline told HuffPost UK. "We want our uniform to truly reflect who we are as individuals while maintaining that famous Virgin Atlantic style. We have been listening to the views of our people and as a result have announced some changes to our styling and grooming policy that support this."

Not only do the new guidelines offer an increased level of comfort, they also provide our team with more choice on they want to express themselves at work. Helping people to be themselves is core to our desire to be the most loved travel company.

If you're anything like me — and the person who tweeted, "WTF. This was a thing?"— then you were probably blissfully unaware that makeup was a requirement for Virgin Atlantic's female employees to begin with.

Because it's 2019, and this really shouldn't still be a thing. A Twitter user in agreement wrote, "It's about time! @VirginAtlantic drops its ridiculously sexist requirement that female cabin and crew members wear make-up."

Yet another person chimed in with, "Female cabin crew working for Virgin Atlantic are no longer required to wear make-up, the airline has announced. Which, you know, shouldn't feel like an exciting step forward as it's TWENTY NINETEEN, but it does."

Another person suggested, "Maybe they should make male staff wear makeup for the next 20 years, for balance." LOL.

Apparently, Virgin Atlantic is so gung-ho on appearances, that it even has "grooming standards managers." During an interview with HJ magazine, the airlines' hair expert, Helen Kavanaugh, offered a glimpse into a few of the hair standards. In addition to only using regulation colors, hairstyles mustn't have any visible roots, no primary colors, and bangs aren't able to fall below the eyebrows. "Cabin crew represent the airline as soon as the uniform goes on and it is our job to ensure they are well-groomed and promote the brand as a glamorous, yet contemporary company," Kavanagh explained.

It'll be interesting to see how many female Virgin Atlantic employees opt to go makeup free now and/or wear pants that they have the choice. (Although, it doesn't really matter in the long run, I suppose.) But hey, at least they actually have the choice now. Welcome to 2019!

More Like This
Here’s How To Fight For Abortion Rights
Obamas Issue Powerful Statements After Supreme Court Ends Roe v. Wade
Keep Talking To Your Kids About Abortion — It's More Important Than Ever
Meghan Markle Calls On Men "To Be Vocal" In The Aftermath Of Roe v. Wade Ending