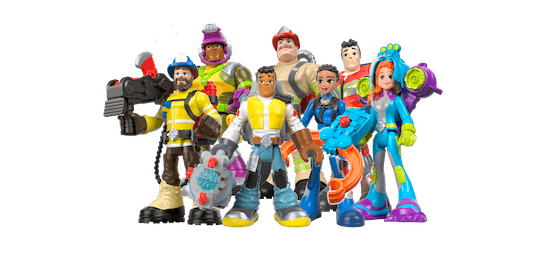 If you're looking for a way to kick-start your July with more of a bang than the obligatory fireworks provide, you can head to the parking lot of one of 500 Walmart stores nationwide to attend the Fisher-Price Rescue Heroes Touch-A-Truck Experience. To celebrate the re-launch of the iconic Fisher-Price toy line, your kids can see, touch, and take photos with real fire trucks, police cars, and first responders at select Walmart locations starting July 4.

What is more cool to a little kid than meeting everyday heroes in real life? Pretty much nothing. If you've ever seen your child's face light up when a firetruck passes by or when they meet a police officer in uniform out in public, you know what I'm talking about. And if you want to see that same excitement manifested larger-than-life for your child, taking them to Walmart for the Fisher-Price Rescue Heroes Touch-A-Truck Experience is a no-brainer.

There is no admission fee for the event, but toys from the Fisher-Price Rescue Heroes line will be available to purchase exclusively from Walmart in the stores where the events are being held at price points ranging from just under $10 for action figures, and up to $50 for the ridiculously cool transforming fire truck toy. The Fisher-Price Rescue Heroes Transforming Fire Truck comes complete with alarm lights and sounds, as well as a working claw arm and hose that launches water ⁠— it seriously looks like something that kids could play with for quite a while without getting bored.

The Fisher-Price Rescue Heroes action figures themselves are truly inspiring for kids. Each hero has unique qualities that scream bravery and will ignite your kid's imagination. They can fight fires alongside Billy Blazes, dive deep for water rescues with Sandy O'Shin, or provide life-saving medical support like Reed Vitals. Certain figures have special support vehicles that really work, such as Sky Justice's Hover Pack with spinning propellers and Forest Fuego's Fire Tracking Vehicle with retractable grappling hook.

You may remember some of these Fisher-Price Rescue Heroes characters from the early 2000s toy line that sparked its own animated series and direct-to-video movie. These brave first responders are intended to help young children learn about real life heroes, understand the tools used to help provide aid during natural disasters, and foster a sense of adventure without using violence. As part of the re-launch, animated Rescue Heroes content is available on YouTube for your entire family to enjoy.

"As Fisher-Price looks to reinforce its position in helping parents of kids zero to 5 years old, Rescue Heroes is a great example of a unique offering that works to provide greater purpose to play," said Chuck Scothon, Senior Vice President of Fisher-Price in a press release. "Rescue Heroes for us serves to recognize and honor everyday heroes, from first responders to young children who perform incredible, noble acts. It's a departure from action figures built around good versus evil storytelling, providing mom an alternative she can feel good about,"

The clever names are adorable, but the true meaning behind each of these characters has been carefully crafted to stress the importance of their role in society for children. At the Fisher-Price Rescue Heroes Touch-A-Truck Experience, kids can meet and take photos with local first responders, which is a great way for them to get to know those who make such an impact right in their own community. To top it off, kids can explore fire trucks and/or police cars, as well as play with the new Fisher-Price Rescue Heroes toys, and take pictures with life-size Rescue Heroes cutouts. Your kids will also have a chance to take home a poster depicting the toys, as well as the animated content on YouTube, which they can hang right in their own room to commemorate this special event.

The event will run for the first two weekends of July, beginning July 4 and concluding July 14. To find a Walmart location near you that is hosting a Fisher-Price Rescue Heroes Touch-A-Truck Experience, simply type your zip code into this form on Walmart's website.