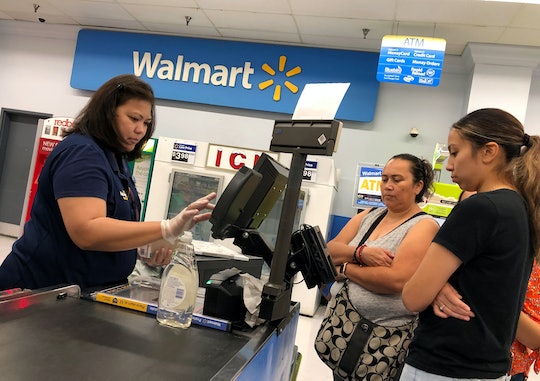 It has been a difficult few months for gun violence in America. Realistically speaking, it is often a difficult few months, but in the wake of several horrific mass shootings, this summer has been especially tough. And while there are plenty of people profiting from the sales of guns who shake their heads sadly and offer their thoughts and prayers to the victims and survivors, it's a rare thing to see any of these businesses doing something about it. Today is that rare day, because Walmart is going to limit handgun and ammunition sales moving forward. Because I think there have been more than enough mass shootings to last a lifetime.

On Tuesday Walmart CEO Doug McMillon issued a memo noting that the supermarket giant would be discontinuing all sales of ammunition used in military-style short barrel rifles, and end all sales of handgun ammunition. In the state of Alaska Walmart will no longer be selling handguns at all. This decision comes after two shootings at Walmart stores this past summer, one in Southaven in the state of Mississippi that left two employees dead and another that left 22 people dead at a Walmart location in El Paso, Texas. Both shootings happened in July... and sadly they were not the last of the summer. On Aug. 4 another mass shooting in Dayton, Ohio left 10 dead and 27 injured.

As McMillon explained in the memo, per CNBC, this brutal summer of violence will lead to some changes at Walmart:

• After selling through our current inventory commitments, we will discontinue sales of short-barrel rifle ammunition such as the .223 caliber and 5.56 caliber that, while commonly used in some hunting rifles, can also be used in large capacity clips on military-style weapons;

• We will sell through and discontinue handgun ammunition; and

• We will discontinue handgun sales in Alaska, marking our complete exit from handguns.

Walmart is further asking customers to stop carrying firearms in their stores if they happen to live in a state with an "open carry" law, unless there are law enforcement officers present. This rule will also be implemented at Walmart subsidiary Sam's Club.

While these new measures will certainly be welcomed by many people across the country who have become frankly terrified of the escalating issue of gun violence, this is by no means a final solution. Walmart is not the only chain selling guns, of course, and the company vows to work alongside other firearm retailers to make the "overall industry safer." Then there is the issue of the government to contend with... as McMillon well knows. At the end of his memo, the Walmart CEO shared a plea with goverment officials in the Trump administration to consider debating the re-authorization of the Assault Weapons ban, per CNBC:

Finally, we encourage our nation’s leaders to move forward and strengthen background checks and to remove weapons from those who have been determined to pose an imminent danger. We do not sell military-style rifles, and we believe the reauthorization of the Assault Weapons ban should be debated to determine its effectiveness. We must also do more, as a country, to understand the root causes that lead to this type of violent behavior. Today, I’m sending letters to the White House and the Congressional leadership that call for action on these common sense measures. As we’ve seen before, these horrific events occur and then the spotlight fades. We should not allow that to happen. Congress and the administration should act.

This might not be the final step towards ending gun violence, but Walmart's decision to limit gun and ammunition sales is, at the very least, a step in the right direction.