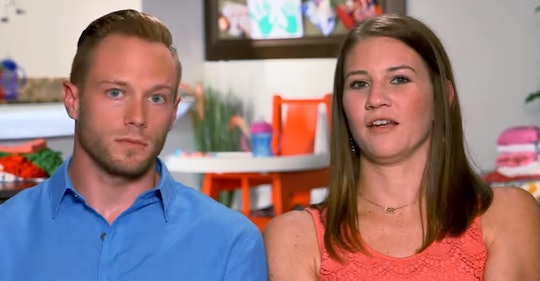 Was Danielle Inseminated On ‘Outdaughtered’?

Most parents of toddlers (or any humans, really) tend to get pretty tired. Feel overworked. It's easy to start feeling sorry for yourself... until you remember Danielle Busby of TLC's Outdaughtered. And then you're like, Oh I'm fine, please. For the uninitiated, Danielle and her husband Adam are parents to one sweet little 6-year-old daughter and, oh yes, five more daughters. The girls were the first set of all female quintuplets born in the United States. Which naturally means they get their own show, of course. While Danielle was not actually inseminated on Outdaughtered because the TLC reality series didn't begin until after the quints arrived, that was how she conceived the five little girls.

All of the Busby children, including 6-year-old Blayke, were conceived through intrauterine insemination, or IUI, a costly procedure that "involves placing sperm inside a woman’s uterus to facilitate fertilization. The goal of IUI is to increase the number of sperm that reach the fallopian tubes and subsequently increase the chance of fertilization," according to American Pregnancy. Danielle has blogged about her journey with IUI, documenting her struggles with infertility, the toll it took on her relationship with her husband, and the relief she felt when she discovered she was pregnant a second time. This time with five babies! She wrote in her blog, It's A Buzz World, about her experience with IUI:

After trying again on our own for months, we knew that we would have to undergo the same round of procedures for Baby #2. Having most of the guesswork out of the way from the last time, our Doctor started Danielle out with the same [regimen] that she was on when we were pregnant with Blayke. It worked just after two months!

The five girls (Ava Lane, Olivia Marie, Hazel Grace, Parker Kate, and Riley Paige) are now 2 years old, and keeping their parents busy — not to mention big sister Blayke has taken on quite the workload all at once. Danielle, who also manages to find time to work as an independent beauty consultant if you can believe it, reported that the girls are officially hitting the "terrible twos" during the first episode of Season Three of Outdaughtered on Tuesday.

We are in full force with the terrible twos. I thought we would have had a little more time before we hit the terrible twos, because they're preemies. I mean they were born, like, three months early.

The Busbys might have felt "outdaughtered" before, but imagine what their lives are going to look like with five mobile little toddlers running around the house. Do the math guys... it's not looking good for them.

But I guarantee you, after trying so hard to get the family they wanted, they wouldn't have it any other way.