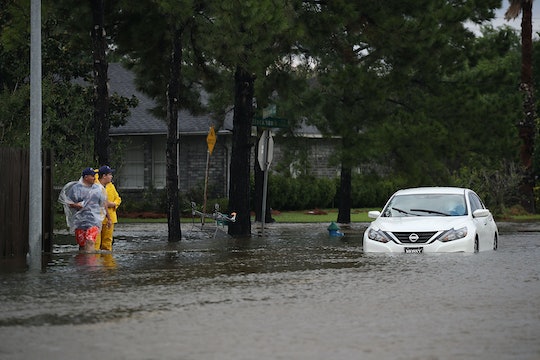 Ranking tragedies against one another is, in so many cases, unproductive. But, in the event that the given circumstances aren't taken seriously, doing so can help bring light to the seriousness of a devastating and trying situation. As the nation is trying to under the devastation Texans are currently facing, many are wondering if Hurricane Harvey was worse than Katrina that happened more than a decade ago. Former FEMA Director Michael Brown has reportedly dubbed it so, heightening concern nationwide about all of the damage and reconstruction that Texas will have to face in the weeks, months, and even years to come.

Harvey hit Texas last week, generating extreme rainfall that flooded Houston and its surrounding areas. Between 20 to 50 inches of rain are possible in some areas, causing rivers to rise, homes to be engulfed, and infrastructure damage that hasn't even been able to be assessed yet. Rainfall thus far, on the other hand, was not as significant of an issue for Katrina back in 2005, when structural failures — including broken levees and flood walls — caused irreversible damage, decimating the coast of Louisiana.

In examining the paths of the storm, Harvey and Katrina had opposite journeys, so to speak. Whereas Katrina grew stronger post-landfall, Harvey has been downgraded since hitting the coast. That's not to minimize either's significance; Both storms were (and are) huge, Katrina just continued to peak after hitting the coast, whereas Harvey's most damaging moments were spent offshore.

In the end, Katrina was responsible for 1,833 deaths and cost about $108 billion in damages, according to Live Science. As of now, Harvey's death toll is reportedly at 14, and the costs in damages are not yet known, as the city remains underwater and citizens still require rescue.

Aforementioned former FEMA director Brown told the Houston Chronicle that "there are several factors that make [Harvey] worse than Katrina," highlighting "the scope of the flooding. Harris County and the surrounding areas are so saturated," he told the outlet. "Also, the amount of damages will continue to grow. There will be mold and structural damages adding up."

Brown's estimations are mostly economical. "This will unfathomably expensive for both the private sector and taxpayers," Brown told the Houston Chronicle. "This will be easily the most expensive natural disaster in American history," he insisted — a distinction previously given to Katrina.

In an editorial for The Hill on Harvey's impact, Brown addressed President Donald Trump specifically, asking that he "ensure the federal government does its job and does it well," working to protect and rebuild Houston.

Katrina and Harvey are massive in scale and require significant support from the federal government and elsewhere. Katrina's impact still rings out, so if comparing the storms helps give aid to Texans who sorely need it, then perhaps comparing the two is a productive choice — not a disrespectful one.