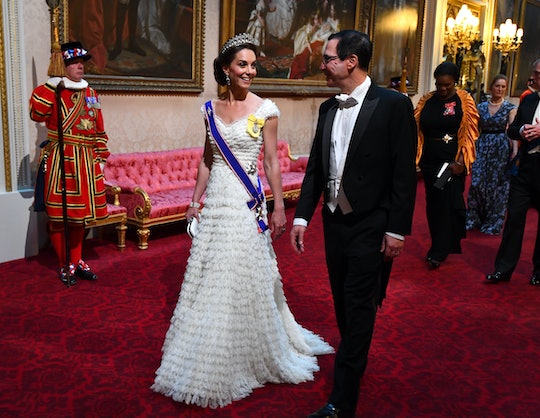 She's a royal who has never said the "wrong thing," or thrown public shade at absolutely anybody... at least as far as I can remember. So while the Duchess of Cambridge, Kate Middleton, might not have considered what her ensemble at the recent Buckingham Palace State Dinner in honor of the visiting U.S. president might imply. Still, it's not totally outrageous to wonder if Kate Middleton's tiara at the palace state dinner was aa subtle dig at President Donald Trump.

According to Harper's Bazaar, Middleton wore a stunning outfit at the formal dinner that capped off a visit between the British monarchy and Trump, wife and First Lady Melania, and a team of Oval Office advisors.

That full-length number, a white Alexander McQueen stunner, was finished off with the most gorgeous jewelry of all: The Cambridge Lover's Knot tiara, a priceless headpiece that Middleton inherited after her marriage, from her late mother-in-law, Princess Diana's collection.

So, what's the connection between Trump and several pounds worth of antique diamonds and pearls, which are reported to be heavy enough to inspire a headache in the wearer?

Middleton's mom-in-law is arguably the most famous owner of the Lover's Knot headpiece, which was given to her following her 1981 nuptials by Prince Charles, from a collection of jewelry originally owned in the early 1900's by Queen Mary, according to Harper's.

As London's Evening Standard newspaper detailed, Trump told "shock jock" Howard Stern in 1997 that he could have slept with Princess Diana.... if he wanted to, later adding that the beautiful royal would have had to have to take and pass an HIV test before she had the privilege of sleeping with him.

Uh. This is so creepy. (I would imagine this is mitigated to Trump fans by the fact that he said nice things about Diana her after her untimely death, as the newspaper noted.)

So just imagine what might have been going through William, Harry, and Kate's minds as they interacted with the guy who bragged about wanting to sleep with their mom.

And since a royal always has to have sparkling manners, the decision to wear the most famous piece of jewelry once owned by the Windsor who was eventually dubbed the "People's Princess" could easily be constructed as a subtle jab from Diana's daughter-in-law, silently standing up for her deceased mother-in-law.

In case you're thinking we're getting ahead of ourselves here, there is an actual history of royal shade being thrown at Trump (at least we think): Fox News reported Prince Charles' better half, Camilla, Duchess of Cornwall, turned and winked at cameras, maybe with a mischievous smile, after meeting Trump and First Lady Melania. (See the clip and you'll see what I'm talking about... it's pretty epic.)

We'll probably never know if this choice of accessories meant what we think it might have (and Middleton is known to love the piece, so it easily could have been a decision based solely on personal preference), but it's not weirdest thing to imagine there was a message for the president amid all the jewels and finery. Hey, maybe he'll even pick up on it and stop saying things about people. Anything's possible, right?