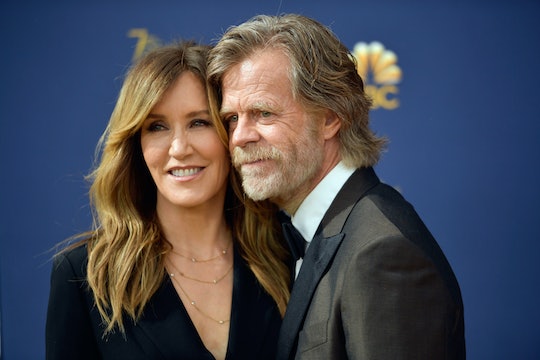 William H. Macy Wasn't Charged In The Alleged College Admissions Scheme, But Why?

By now everyone has heard about the massive college admission scandal dubbed "Operation Varsity Blues" by the FBI, as ABC News reported. While there were a total of 50 people charged in connection with the investigation, the internet and media have been perhaps the most focused on the celebrities reportedly involved — Fuller House's Lori Loughlin and Desperate Housewives' Felicity Huffman, both have been charged in the alleged scam. But here's what's really interesting: Felicity Huffman's husband was not. So, why wasn't William H. Macy charged?

Romper's requests for comment from Huffman and Macy's reps were not immediately returned, and Loughlin's rep told Romper they did not any have information right now.

The FBI investigation reportedly has evidence that a witness to the investigation known as "CW-1" met with both Huffman and her Oscar award-winning husband Macy in their home in Los Angeles to discuss their daughter's upcoming SAT exam in December, according to Vanity Fair.

Vulture noted that court documents concerning the case against Huffman read, "According to CW-1, he advised Huffman and her spouse that he ‘controlled’ a testing center, and could arrange for a third party to purport to proctor their daughter’s SAT and secretly correct her answers afterwards. CW-1 has advised investigators that Huffman and her spouse agreed to the plan."

And yet, according to the Associated Press, Huffman was charged and Macy was not, and authorities have not said why this is the case.

Despite the fact that Macy appears to have been implicated by the witness in the investigation along with his wife, Huffman was the one who was brought into custody for the charges, according to the Associated Press. She was also the one who stood before a judge and was eventually released on a $250,000 bond on Tuesday, as ABC News reported, and Macy was with her in the courthouse, according to Variety.

Macy actually opened up publicly about struggling through the college admissions process himself during an interview with Parade last year. The Shameless actor told the publication that he was finding the college application process for his 18-year-old daughter Sofia "stressful."

"She's going to go to college. I'm the outlier in this thing. We're right now in the thick of college application time, which is so stressful. I am voting that once she gets accepted, she maybe takes a year off," Macy told Parade.

While authorities haven't stated a reason, New York law school professor Rebecca Roiphe explained to Vulture that there could be several reasons why Macy wasn't charged. "There are a couple of different possibilities. One of the possibilities is that the husband is far less culpable," Roiphe told Vulture. "Maybe it’s possible that the government has far more evidence than it’s laid out here, and in this evidence, that Huffman played a far more significant role than her husband."

Roiphe also noted that, because Macy was simply named as "the husband" in court documents, as reported by The Daily Mail, there's a possibility that he might have co-operated with the reported investigation.

Whatever the reason authorities might have for not charging Macy, whether it might be because there is less evidence of his involvement or for other reasons unbeknownst to us, it seems like this case is just getting started and more could be revealed soon.