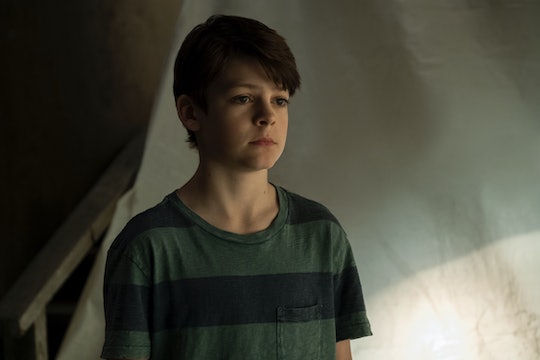 If you've had a conversation with me at any time since I started watching The Haunting of Hill House on Netflix, I have probably brought it up. This isn't an ordinary haunted house story, I'll assure you. Yes, it's terrifying but it's also a poignant story about childhood trauma — by this time you might be already walking away from me, but you should hear me out. The adult actors in the show are incredible but it was the children that really had me screaming at the TV. Romper spoke to Paxton Singleton, the pre-teen actor who plays Young Steve in the show, about the scariest moments on set.

A bit like his stoic and head-in-sand character, Steve, Singleton isn't big on ghost stories — and doesn't actually believe in ghosts. Notably, Michael Huisman, who plays adult Steve, doesn't either. Perhaps this is part of why the two of them are so good at playing Steve, the oldest of the five siblings who spent one harrowing summer in the haunted house being beset by ghosts. The show jumps between the five adult Crain siblings still trying to deal with the trauma they experienced at Hill House, and the Crains as children, when the haunting actually happened.

Of all the siblings, Steve probably had the fewest real life encounters with things that go bump in the night, though he experienced plenty of his own frights. But Young Steve is a good big brother, who at least tries not to be frightened by the spooks that haunt his younger siblings. In real life, Singleton calls himself a "scaredycat." In an email with Romper, the young actor recalls the closest he's ever come to an actual ghost with possibly the most relatable anecdote I've ever heard. "My grandparent's house sure does seem haunted. I always run up her stairs because I feel like a ghost is behind me. I know it's not really haunted. It just creaks an awful lot." Is there a person alive who does not have that exact same memory? I may or may not run up my grandmother's staircase every time I have to go up to the attic to this day. And I am a grown up.

Luckily, however terrifying the show appears now, Singleton says the atmosphere on set (at least for him) wasn't too creepy. That is, except for the time he lost his cell phone. "I had to go back for it and everyone had moved to the funeral home set. Can you imagine walking through the set of house that was designed to be haunted with just a flashlight? That definitely freaked me out," Singleton admits. Understandable!

Luckily, the set was not literally haunted and Singleton was never actually haunted by real ghosts. At least, not that anyone knows of.

That being said, what I do know is that The Haunting of Hill House is one of the best haunted house stories I have seen in a very long time, and I probably won't stop talking about it until all of you have watched it.