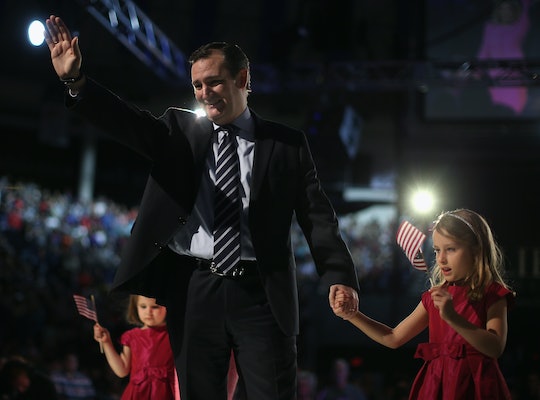 'Washington Post' Pulls Cartoon With Ted Cruz's Daughters Depicted As Monkeys, But It's Too Little, Too Late For Supporters

On Tuesday, The Washington Post ran an editorial cartoon depicting Ted Cruz's daughters as monkeys. The cartoon shows Cruz, all puffed up, walking two little monkeys in Santa outfits on a leach. The leash is attached to a box with "Campaign 2016." Above, a headline "Cruz Uses Kids As Political Props" and the monkeys' outfits were a direct callback to a campaign video Cruz released this week with his daughters reading satiric holiday stories.

Almost as soon as the cartoon went live, Cruz called cartoonist Ann Telnaes out on Twitter to essentially pick on someone her own size. He wrote: "Classy. @washingtonpost makes fun of my girls. Stick w/ attacking me —Caroline & Catherine are out of your league."

Telnaes defended her cartoon, saying that, despite what she calls “an unspoken rule” that children are off limits, her use was justified:

But when a politician uses his children as political props, as Ted Cruz recently did in his Christmas parody video in which his eldest daughter read (with her father’s dramatic flourish) a passage of an edited Christmas classic, then I figure they are fair game.

The cartoon has since been taken down by the Post with a note from editor Fred Hiatt:

It’s generally been the policy of our editorial section to leave children out of it. I failed to look at this cartoon before it was published. I understand why Ann thought an exception to the policy was warranted in this case, but I do not agree.

Telnaes later tweeted that because Cruz had used his children in his holiday parody video, that it was fair to use them in his cartoon. The video shows his two daughters reading “Christmas Classics,” such as “How Obamacare Stole Christmas” or “Auditing St. Nick.” It’s silly and a little tasteless — almost as silly and tasteless as a cartoon depicting his daughters as show-monkeys for his campaign.

There are two lines of thinking about this incident. The first is that the media should leave children out of it, even if the candidates don’t. Sort of like how you can make fun of how overbearing your mother is, but your SO can’t.

The second is that if you really don’t want any attention to your family, you don’t parade them around at all. It’s hard to say you want to protect them, when you create a video meant to go viral starring them.

So far, Cruz supporters (and some opponents) are taking his side:

I'm not a cartoonist, but if you wanted to make a statement about Cruz using his kids as political pawns, there could have been lots of ways to do it so that it was just as effective, but didn't rise to scandal level or give Cruz a chance to take more digs at the media. Bah humbug.

More Like This
How To Breastfeed A Baby With A Cleft Lip Or Cleft Palate
Sea Monsters, Pandas & Everything Else Coming To Netflix In July 2022 For Families
How Do I Rediscover My Sexuality When I’m Completely Touched Out?
Yellowstone Season 5 Officially Has A Premiere Date