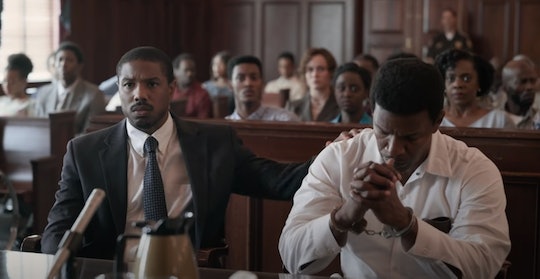 As protests calling for justice for George Floyd continue across the country, sparking important conversations about racial injustices and systemic racism, Warner Bros. has made it possible for everyone to watch Just Mercy for free during the month of June. Released in theaters this past December, Just Mercy is based on a true story of one Black man's wrongful conviction and his "battle for justice."

Just Mercy tells the story of Walter McMillian (Jamie Foxx), a Black man who was wrongfully convicted of murdering an 18-year-old white woman in Alabama in 1987, and how civil rights attorney Bryan Stevenson (Michael B. Jordan) helped prove his innocence.

"We believe in the power of story," Warner Bros. said in a statement. "Our film Just Mercy, based on the life work of civil rights attorney Bryan Stevenson, is one resource we can humbly offer to those who are interested in learning more about the systemic racism that plagues our society."

"To actively be part of the change our country is so desperately seeking, we encourage you to learn more about our past and the countless injustices that have led us to where we are today," the statement continued. "Thank you to the artists, storytellers and advocates who helped make this film happen. Watch with your family, friends and allies."

Throughout the month of June, you can watch Just Mercy for free on your preferred digital streaming platform. You can find it on YouTube, Amazon Prime, in the Google Play store, on Vudu, or on iTunes for a free, temporary download.

In 1987, McMillian was with his family 11 miles away from where the murder happened when it occurred and had dozens of people who could testify his innocence, according to Stevenson's Equal Justice Initiative. Yet, false statements and a nearly all-white jury convicted him of capital murder, sentencing him to life in prison without parole. Stevenson was able to prove McMillian's innocence with new evidence, and he was released from death row in 1993 — six years after his conviction. Just Mercy tells this powerful story from start to finish, although the timeline of the case was condensed for the film, according to USA Today.

Stevenson told NPR in 2014 that this kind of injustice has a lasting impact on people. "One of the things that pains me is we have so tragically underestimated the trauma, the hardship we create in this country when we treat people unfairly, when we incarcerate them unfairly, when we condemn them unfairly," he said. "You can't threaten to kill someone every day year after year and not harm them, not traumatize them, not break them in ways that [really] are profound."

In addition to reading books about race, educating ourselves on how to be anti-racist, and supporting organizations fighting racial injustices right now, add Just Mercy to your watchlist this June.

More Like This
15 Awesome Movies For Families To Watch During Hispanic Heritage Month
10 Facts About 'The Nightmare Before Christmas' That May Surprise You
You Can Stay At A ‘Hocus Pocus’ House On Airbnb — And It’s In Salem!
Every State’s Favorite Halloween Movie For Kids In 2022