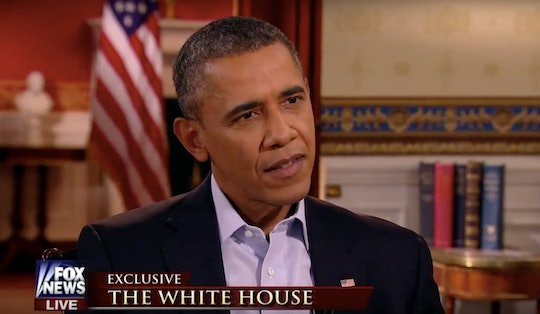 President Obama never likes to predict the outcome of the Super Bowl during his pre-game Super Bowl interviews. Can’t say I blame him. As Commander in Chief of an entire country, it's probably not the wisest decision to pick one city over another. But regardless of whether the president is able to make a call one way or another, you should still definitely make sure to binge watch as many previous Obama Super Bowl videos as possible before the big game on Sunday night — because he'll no doubt be building on statements he's made in previous years.

You do kind of have to wonder if the president will end up picking a winner between the Carolina Panthers or the Denver Broncos for Super Bowl 50 this year. Because you know technically, he’s almost done being the Big Boss. He can loosen up a little if he likes. That hasn’t necessarily been the case in the past. Covering topics like the IRS scandal and his ever controversial universal health care plan, it's been a pretty steady stream of serious talking points to say the least.

Some are hoping that this year will be a little different. With his time in office drawing to a close, this might be the time to shake things up a bit. Maybe Obama will go out on a limb and predict a winner when he and first lady Michelle are interviewed by Oprah's bestie Gayle King on CBS Sports this Sunday, Feb. 7.

We'll just have to wait and see. Until then, here's a look back at the good, the bad and the ugly of the last seven years of Obama's pregame Super Bowl interviews.

Fresh and new, the President fielded questions about Wall Street bailouts and bipartisanship from Lauer like a champ. Plus they both look young and happy, right?

Possibly an even better rivalry than anything we've got going on in the NFL. Who are you rooting for here?

Campaigning hard for a second term, Obama went over his track record in the first term, more Wall Street and a return to good, old-fashioned family values.

In 2013, Obama and Pelley discussed women in combat, Boy Scouts of America and, yes, a little bit of football. A safe, careful interview between two safe careful guys. And then came...

The Affordable Care Act. Benghazi. The IRS scandal. Uncomfortable smiles and audible sighs. I couldn't decide if this was cringe-worthy or marvelous to watch. Or marvelously cringe-inducing. Either way, make sure to take a look before Sunday's game and re-live the total awkwardness.

A lighter, sleeves-rolled-up version of Obama. Because people are playing beer pong while they wait for the game to start, aren't they? So time to lighten up, maybe. Plus he drinks beer he brewed himself. If you can't beat 'em...

If you're looking for a way to prep for both the big game and the president's final Super Bowl Sunday interview this year, watching his past sit-downs certainly couldn't hurt. If nothing else, they'll provide a welcome break from the intensity of campaign season... right?