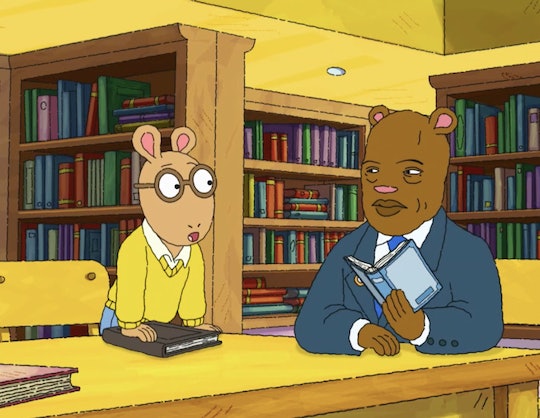 Rep. John Lewis Once Made A Cameo On 'Arthur' — Here's How To Watch With Your Kids

As the country continues to mourn the loss of an iconic figure of the civil rights era and revered congressman, PBS Kids will be airing an episode of Arthur that features a cameo from Rep. John Lewis offering everyone's "favorite aardvark some guidance on standing up for what's right."

On July 23, PBS Kids will air an episode called Muffy Misses Out. Arthur Takes A Stand from 2017 in honor of Lewis, who died on July 17 at the age of 80. The episode, which will be available on all PBS Kids streaming platforms including the app and 24/7 channel, features Lewis offer words of wisdom when the young aardvark witnessed an injustice against lunch lady Mrs. MacGrady

Lewis devoted the majority of his life to protecting human rights and civil liberties, starting out as an organizer of sit-ins at lunch counters during the 1960s civil rights movement as a student at Fisk University and continuing through four decades of service as a politician, according to his congressman biography. Lewis was a passionate believer in voting rights and standing up for what you believe in. According to Smithsonian Magazine, he was arrested more than 40 times during the civil rights movement and persevered regardless.

In the episode that features Lewis, Arthur is worried about Mrs. MacGrady being overworked trying to run the cafeteria on her own, especially as the school prepares to welcome Lewis and has to make breakfast as well. He goes to the principal to ask for extra help for the lunch lady, but doesn't get anywhere. Lewis eventually sits down with Arthur after he has tried to help the lunch lady, telling him: "Sometimes, people don't hear the first time. You have to be persistent." Lewis goes on to reassure Arthur that "a person of conviction can change the world."

Lewis' cameo wasn't just a lovely nod to a civil rights hero, it was actually a powerful lesson to kids that following their conscience is important and standing up for the rights of other people matters.