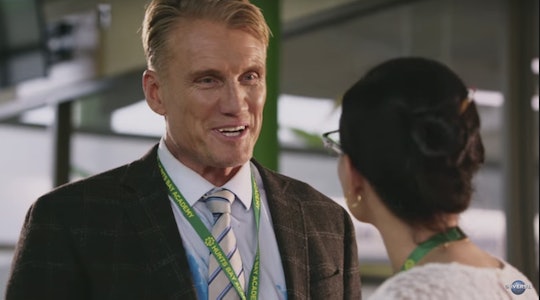 Kindergarten Cop (1990) has all of the glorious ingredients of a guilty pleasure 90s flick. Ah-nold, for one. Adorable yet snarky small children. A love story for the ages that I won't spoil for you. A bad guy with a ponytail and a weird mommy fixation. I mean, seriously. What's not to like? Seems as though Universal Pictures Home Entertainment agrees. They are planning to release a sequel of the epic '90s flick this coming May, and you can totally watch the Kindergarten Cop 2 trailer for yourself before then, just to get yourself all hyped up and nostalgic for days gone by.

There's really only one piece of bad news I have to tell you about, in regards to the new sequel, is that you're not going to get to watch Kindergarten Cop 2 at the movies with a big bucket of overpriced, delicious popcorn. It's one of those straight-to-dvd events that will be available on May 17, 2016. Boo.

So yes, that is Dolph Lundgren you're seeing. He, of the everlasting sequel fame (Expendables 2, Rocky IV) not to mention playing He-Man in Masters of the Universe. Looking not at all like a kindergarten teacher. He is hunting down stolen data at a super artsy school, coming to loggerheads with the liberal touchy-feely administration. The kids are too tough to handle and he's too legit to quit. Cute, right?

The good news is one of the other teachers is a sweet, bespectacled woman who looks young enough to be his daughter but is also incredibly pretty and kind. Love interest? Why yes, I think so!

I'm going to miss the cast of the original Kindergarten Cop. I was particularly enamored with Ah-nold's partner, a quirky overeater played by Pamela Reed who pretty much stole the show whenever she was onscreen. She and Schwarzenegger had fantastic onscreen chemistry, but not in the "gee I hope they do it" kinda way. Lundgren's partner is played by Bill Bellamy (White Collar), so who's to say the show won't be good?

Despite the challenge of following up the popular original flick, I think Lundgren can pull it off. He has that same awkwardly large and serious demeanor thing like Schwarzenegger. And he also doesn't seem to take himself too seriously, which will be important. So let's all take a moment to rejoice in the return to formulaic sequels whilst enjoying a favorite clip from the original.