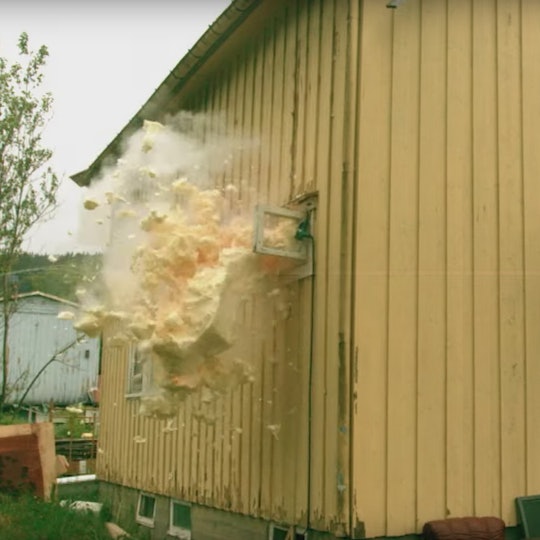 Watch These Guys Fill A House With Exploding Foam, & Other Proof That Men Need To Just Not

In the past decade or so, we’ve seen a host of television programming that revolves around folks (usually men) doing destructive, often dangerous things for absolutely no reason. Maybe it started with '90s phenomenon America’s Funniest Home Videos, where audiences frequently cheered when they saw someone do something like making a bottle rocket out of Coke and Mentos. Then, of course, there came the ever-popular Jackass series, where a group of dude bros decided to record themselves doing unbelievably risky stunts, like when they thought it would be a good idea to rent some cars and crash them into one another...multiple times. This spurred a number of spin-offs, like Viva La Bam and Wildboyz, not to mention inspiring countless young people hoping to reach stardom by sliding down their roof on a toddler wagon (because you know, that’s a good idea).

Then we’ve got shows like Tosh.0, which make fun of people doing things like this. But it has also brought about more professionally made shows that earn ratings by pulling stunts for the sake of being destructive. Take, for example, the Norwegian television program Ikke Gjør Dette Hjemme or “Don’t Try This At Home,” in which a couple of guys find condemned houses and then figure out perilous ways in which to demolish the home...like the time they thought filling a house up with exploding foam would be a good idea:

Dangerous much? At a time when we could use more people to do things like seek and/or create new and alternative and renewable energy sources, or find a cure for cancer before it kills off any more of our loved ones and heroes, or work to reduce our carbon footprint, these dudes are making money by destroying things and basically not adding anything of real value to society. By the way, these are the same guys that thought it would be “fun” to see what happens when you throw water on a grease fire:

Yeah, nope. Totally not necessary. And look, I get the appeal of seeing things blow up. I get it. But it really does feel like there are way more people blowing CDs up in their microwaves and blowing up wild hogs with tannerite (apparently this is a thing and it’s effing disgusting) then there are folks contributing to the state of the world. Don’t believe me? Here’s what you find when you do a YouTube search on people blowing things up and being otherwise destructive: