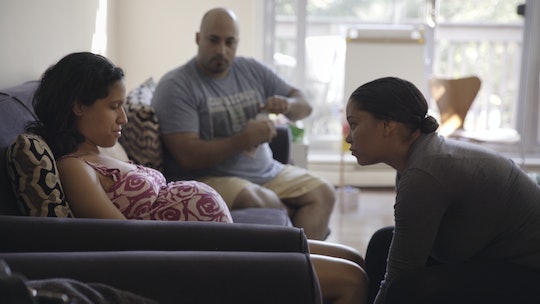 Watch This Doula Spontaneously Deliver A Baby In Her Client's Apartment

At a Thai restaurant in Manhattan on a warm August day, Emilie Rodriguez’s passion for her work is apparent. She’s there with her professional partner, Griselda Rodriquez-Solomon, Ph.D., and Griselda's nearly 3-month-old son, Talib, and the two women pretty immediately launch into a conversation about the thing they like to talk about most, their work. Emilie and Griselda are doulas, nonmedical professionals who support women through pregnancy, birth, and the months after. The two say they consider this work a calling and an honor. “I’m so humbled by the experience of being brought into someone’s space and helping them across the mountain on the most powerful day of their lives,” Emilie says, and you believe her.

Emilie, who is the subject of the first episode of Romper’s Doula Diaries, and Griselda have been practicing as doulas together for about a year and a half under the name Ashe Birthing Services. Many of their clients are women of color and immigrants, breaking the narrative that doulas are only available to wealthy white women. They say they never turn a client away, as doulas provide advocacy, translation, and community services that studies have suggested are especially important for immigrant women in gaining access to safe and effective medical care.

They met when Emilie was a student of Griselda’s at the City College of New York, where Griselda teaches a class called "Transnational Feminism" along with seminars on race and Latino studies. Emilie previously worked as a veterinary technician and began working as a doula about two years ago. She says she’s always been drawn to the birth process and that friends would call her a doula before she officially became one professionally. “I think that everyone [who] is a doula feels the calling,” she says. “I know that my feet are where they’re supposed to be.”

There's no judgement. We just want them to be happy with the decisions that they make and not have regrets.

But it was her birth to her 2-and-a-half-year-old son Elijah that solidified her desire to help other women through the transformation into motherhood. “Anyone who has gone through something can coach someone [else] better,” she says, while acknowledging that there are amazing doulas that don’t have kids. All women have given birth to something, she says. “We birth ideas, we birth businesses, we birth love, but for me, it has helped me a lot in helping know what the sensations feel like to help them get to the other side.”

Two doulas were present when Emilie gave birth to Elijah: Griselda and another doula friend. Her doulas and her step-sister spent an entire day blowing up an inflatable pool for the birth. However, she didn’t make it there. When Elijah entered the world, it was only Emilie and her partner Roy together in the bathroom. “I was like, ‘Roy, I feel the urge to push, but I don’t want to.’ You can’t control it, so I started pushing. In two pushes his head was out. It was so fast,” she recalls. Since she was unmedicated, Emilie says she felt Elijah move down her birth canal as she was on all fours, which is her favorite memory of her birth. “He came out eyes wide open looking straight at me. Roy just collapsed in tears.”

In my opinion, the episode should be called ‘Things That Doulas Don’t Do but Sometimes Have To'

While Emilie and Roy were good candidates for a natural home birth, she says becoming a mother made her much less judgmental in her doula work about other women’s decisions. “Now I come from a place with so much more care and compassion. Something that was hard for me to learn as a doula was meeting people where they are, because not everyone is ready to have a home birth,” Emilie says. “There's no judgement. We just want them to be happy with the decisions that they make and not have regrets.”

While Emilie, Griselda, and many other doulas happily discuss their fondness for home births — the idea being that they allow the mother to labor in a place she is familiar with surrounded by family or chosen community — at times hospitals are necessary or just desired, and that’s cool too. They say they just want to happy mothers and healthy babies and a world where families are able to navigate birthing decisions, such as whether to get an epidural, comfortably and with all of the information they need. No matter the birth plan or location, Griselda says her favorite part of her doula work is seeing the look on a woman’s face the minute the baby enters the world. “I get chills; I usually cry.”

And of course, as Emilie knows from her own birth, things don’t always go according to plan. The birth filmed for Romper’s Doula Diaries, was supposed to occur in a hospital — but their client Christie’s baby had other plans. “In my opinion, the episode should be called ‘Things That Doulas Don’t Do but Sometimes Have To,’” Emilie says. The birth was quick, four and a half hours, so they didn’t make it to the hospital as planned. As a result, Emilie was the one to catch the baby in the family’s home.

“I’m worried about critiques from the doula world because there’s medical professionals in the background and I’m the only one that’s catching the baby,” Emilie says. “Sometimes we forget as doulas that we have a lot of life experience to help in those moments of emergency. I felt confident that had a medical emergency happened the medical professionals were right behind me ready to assist,” she says. “I’m happy because I did the best thing for our baby and our client.”

Emilie says that Christie’s birth, like each birth she is a part of, took her back to her own, in her bathroom with Roy and Elijah. “I was having phantom contractions that matched Christie’s. You’re so in tune. Birth is the most instinctual experience.”