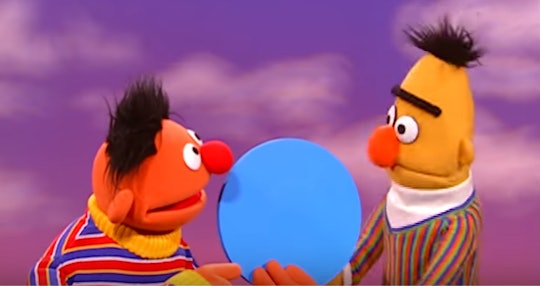 Sesame Street has been around as a childhood mainstay for millions of children in the past 50 years, mine included. While other television shows have come and gone in passing fads (I'm sorry Barney, but you know it's true), Sesame Street stands the test of time for both adults and kids. For adults, we get to enjoy some clever adult-ish humor and surprising celebrity cameos. And for kids... well, it seems they're getting even more out of the beloved series than we even realized. Because a recent study found that watching Sesame Street can boost your kid's success in school and in work down the road, so now you don't even have to feel guilty for hanging out with Grover and Big Bird for an afternoon.

A recent study published in the American Economic Journal: Applied Economics in January 2019, though it was co-written 2015, looked at young children who began watching the PBS program after it first aired in 1969 to track the effect it might have on work and school performance. As People reported, Wellesley College economist Phillip B. Levine and University of Maryland economist Melissa Kearney studied whether or not watching the educational series if children began before the age of 7 would improve results down the road in school by looking at U.S. census data from 1980, 1990, and 2000.

And when looking at employment and education results for children who had watched the series, according to the study, researchers actually found an improvement over those who hadn't been exposed to it at a young age. So now you can enjoy this video of Feist singing "1,2,3,4" with the Sesame gang guilt free.

There were a variety of factors included by researchers when looking to determine outcomes; the grade they were enrolled in, whether or not they attended college and graduated, their employment status and their poverty status.

Now, according to Moms.com, the researchers had to base their findings on the strength of the television signals available in each country. In other words, if the signal was strong enough to pick up Sesame Street, they presumed kids were watching it (which feels like a safe bet based on its enduring popularity).

Study co-author Levine previously explained to HuffPost back in 2015, when the study was initially authored, that Sesame Street shouldn't take the place of other preschool education programs like Head Start, but it could be considered a complementary addition.

"I think what we take away from our results and analysis is what we have here is a really, really good way to augment other forms of early childhood education that could potentially boost the effect at really a very small cost," Levine told HuffPost. "We're not arguing that educational TV or 'Sesame Street' are sufficient — that's probably not going to do it."

Sesame Street has rather cornered the market on getting kids to learn with a mix of music, rhymes, color, and muppets who are learning along with kids. I think that might be the magical element right there, to be honest. Nobody on Sesame Street is talking down to kids; they're trying to learn with them. And in some cases, the kids even outsmart the muppets. It makes sense that these lessons would endure and help children well into their adult years.

And if that's not an argument to protect publicly-funded programming, I don't know what is.