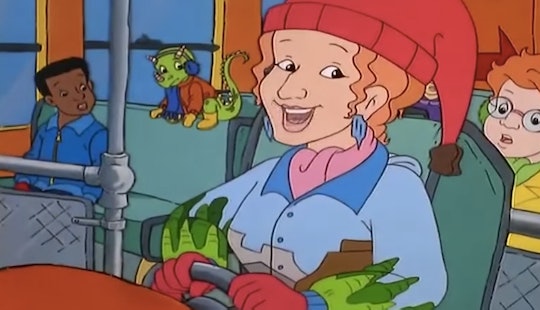 The only thing I'm sure of when it comes to science is that it's not my best subject. Fortunately, my 5-year-old son didn't inherit my aversion to this brainy specialty. In fact, he loves science. We have video of him saying "Pachycephalosaurus" (a dinosaur) when he was barely 2 years old. He wants to be a marine biologist, for crying out loud. In addition to science, my son also loves TV. Especially cartoons. Since I'm not a fan of science, but am a fan of kicking back with a glass of wine while my son's occupied for an hour or two, I figured maybe TV could teach him science for me. The Magic School Bus, which follows the learning adventures of Mrs. Frizzle and her class, was an old favorite show of his. The show, based on a book series, involves field trips to fantastic locations such as the inside of a human body or outer space. On these field trips, the students learn in a fun, first-hand way about the inner workings of the natural world.

If it worked for Mrs. Frizzle's class, it might work for my kid, who's in a pre-kindergarten program. So I decided, since my boy loves science, that I'd let my son watch The Magic School Bus to learn science.

I decided to conduct an experiment to see if my son could actually learn science concepts from just watching The Magic School Bus. I'd hold the experiment by showing him three episodes of The Magic School Bus he'd never seen before, and ask him questions after each episode about the show and what he'd learned. I'd ask him about specific science concepts introduced as part of the show, and whether he'd learned these previously elsewhere. To ensure my son wasn't just parroting back to me what he'd heard on the show, I'd ask him to explain to me how the science worked.

My son was eager to watch the show, with no prodding required. The trickiest part, in all honesty, was me paying attention while he watched to quiz him later. The show is entertaining and well done, mainly because of the quick pace and interesting topics, but it's still a kids' show and I'm a busy mom who doesn't have a lot of extra time to spare for chilling in front of the screen.

The first episode of The Magic School Bus my son watched was "Gets Planted," which deals with how plants get nutrients and grow. After the show, I asked him some questions about what we'd seen. My son correctly recalled from the show that plants require air, water, and sun to grow. When I dug deeper to see if he'd really learned about how plants grow, he made some interesting observations that sometimes appeared to confuse elements of the fantasy of the show with real life. "I learned on the show they grow very fast, but in real life they grow very slowly. And they're magic," he noted.

With the subject of the birds and bees so close at hand, I couldn't resist wading just a little into that treacherous territory, so I asked my son how a human baby is made. "In your tummy," he replied. "But how?" I pressed. He said: "Mommy and Daddy's parts work together. The same thing as a hen's."

My son gathered key points from the episode like how chloroplasts function to capture the sun's energy, but took appearances a little too literally.

He explained the concept of photosynthesis as "Little pebbles float in the air and soak up the nutrients. Then, they make yogurt inside the beans and it pushes out the yogurt." My son was referring to the show's visual representation of the process by which plants convert light energy into chemical energy for release to fuel the plant. I don't think he fully grasped the concept.

The second The Magic School Bus episode my son watched was "Rocks and Rolls," which explains rocks and how erosion works. He learned from this episode that "when you make a mess, it breaks all the stones." Yeah, I didn't really get it, either. He did observe, though, that the "rocks, water, and mountain work together to make ice" on the mountain, demonstrating his understanding of the concept by summarizing what he'd seen instead of repeating it word for word. My 5 year old even grasped that erosion is caused by the water moving down the mountain in the form of waterfalls, carving through the rocks. Once again, he explained erosion in his own words instead of repeating lines from the episode.

The final episode of The Magic School Bus we chose for this science experiment hit a little closer to home than I'd anticipated. It had a reproductive theme.

The final episode of The Magic School Bus we chose for this science experiment hit a little closer to home than I'd anticipated. It had a reproductive theme. "Cracks a Yoke" dealt with the incubation and hatching of baby chicks. My son remembered from the show that a chick is made by the hen and rooster "doing their parts." I don't think he truly understood how reproduction worked to create the chick, but to my knowledge that was the first time he'd even learned that a male and female were necessary to make a baby. Although the show came close to stepping into taboo territory with the discussion of reproduction, I feel it handled the subject well. The episode revealed just enough information to make sense without going into too many details.

Reproduction in its various forms is certainly an important part of nature, and discussing it in simple terms in a children's show about science seemed reasonable to me. Of course, if the show had revealed the gory details of human reproduction, I probably wouldn't be happy — that's a discussion I want to have with my children when they're ready.

According to my boy's explanation of the episode, the mother has the "egg" and dad has the "baby." He recalled that the yellow part of the egg is called the "yoke" and the outside is the "shell." However, he claimed he knew before the episode about eggshells. I don't feel he really grasped how the rooster fertilizes the egg, because the show didn't delve into those details. Clearly, though, he learned the basics of who is required to make a chick.

My son said this was his favorite The Magic School Bus episode yet "because I like experiments and all the hen stuff." With the subject of the birds and bees so close at hand, I couldn't resist wading just a little into that treacherous territory, so I asked my son how a human baby is made.

"In your tummy," he replied.

"But how?" I pressed. He said: "Mommy and Daddy's parts work together. The same thing as a hen's." And there we had it.

Did The Magic School Bus School My Son?

All said, I was pretty impressed with the science my son learned just by watching The Magic School Bus. The show alone is clearly not an adequate replacement for science education in school, or even for the interaction of science play and reading science-type books at home. I mean, it's a half-hour long and has to incorporate an entertaining plot, so there's only so much educational ground it can reasonably cover per episode.

Sure, my son didn't understand everything that was happening, but he was never bored, and that's saying a lot.

Still, The Magic School Bus did show my son real-world science issues that address topics he and other kids might be curious about. Like how animals develop, and how different life forms thrive. My son already had a passion for science and is a sponge who loves learning new information, so he was eager to pay attention to the three episodes. But the subjects are complicated, which left plenty of room for misinterpretation. In an effort to help avoid misinformation, I felt that watching the show along with my son was helpful. The best part? Even though younger children probably won't grasp much of what's happening, they can still appreciate good TV. My 1-year-old daughter watched parts of the episodes along with her brother and seemed to enjoy the bright, fast moving colors, but was only momentarily intrigued.

Taking a fresh look at a show I watched as a child, I was impressed with the way The Magic School Bus tackles fairly complicated scientific concepts in a way that's appealing to kids. Sure, my son didn't understand everything that was happening, but he was never bored, and that's saying a lot. I also relearned information about plants, rocks, and animals that I hadn't heard since junior high, and even had some fun spending time with my son and watching the show.