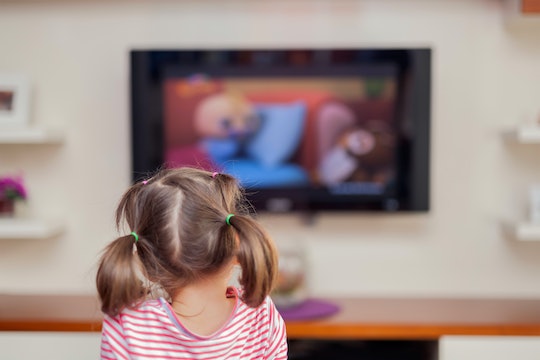 Letting Your 2-Year-Old Watch Too Much TV Could Have Serious Health Effects, Study Says

Honestly, it can be really, really hard to navigate screen time use when you have kids. Many of us already spend more time than we probably should on our own devices after all, and, well, TVs and iPads really do help provide a little bit of quiet time when you're trying to make dinner, or when you just need a break. As much as we might want to reassure ourselves that screen time isn't really that bad for our kids though, the research consistently seems to disagree: a recent study found toddler screen time makes for less healthy teens, which reinforces the idea that exposure to screens really can have a measurable, long-term effect on children's well-being.

As a parent of 5-year-old twins who has longed used the TV as a co-parent for sanity-saving purposes (and who used iPhone apps as a toilet training secret weapon, sorry, not sorry), I'll readily admit that I'd like to ignore these scientific findings completely. Unfortunately, the ongoing evidence definitely seems to suggest that would be the wrong move. In a study published in Preventative Medicine this month, according to Science Daily, researchers at the Université de Montréal School of Psychoeducation found that children who watched a lot of TV when they were 2 years old were more likely to have poor eating habits at 13 years old, were more likely to be overweight, and didn't perform as well at school.

In October 2016, the American Academy of Pediatrics announced updated guidelines for children's screen time use. The AAP recommended that children under the age of 18 months avoid screen time entirely — although exceptions could be made for FaceTime and video chatting — while children 18-24 months should watch a minimal amount of high-quality television along with a caregiver who can help them understand and interpret what they are seeing. Children in the slightly older 2-5 year age range can handle a little bit more screen time (one hour per day), but the AAP still recommends that it is supervised.

The reason? Pagani explained that while parents might think that allowing young children to watch TV is just a harmless way of encouraging some quiet time, what it is really doing is teaching "overindulgent lifestyle habits" that often "persist throughout the life course," according to Science Daily. And while we may not intend to do it, we're also inadvertently encouraging our children to use screens to distract themselves when they could be learning the important skills of self-regulation and self-control that will help them immensely as adults. Pagani said,

Although it might not be obvious to parents, Pagani's explanation does make a lot of sense — and it also helps to give more context for why the AAP guidelines look like they do. Honestly, the notion of allowing my kids only one hour of cumulative screen time a day seems like it would be pretty difficult, but the study raises a really important point: the time they are spending watching TV is time they could otherwise be doing, well, anything else, and time they can be learning how to keep themselves occupied, how to be patient, how to solve problems, and any number of other important life skills they aren't going to pick up while sitting on the couch watching Paw Patrol.

Of course, long-term eating habits and school performance aren't the only concerns linked to childhood screen time: other studies have found that screen use negatively affects children's sleep habits, for example, which is especially worrisome given that children's use of smartphones and tablets has actually tripled in the last four years. And although all of this data might feel like one, big, parental guilt trip for those of us who are more laid back regarding screen time, the reality is that it doesn't have to be an all-or-nothing proposition: any reduction in screen time is better than none at all.

One way to encourage that to happen? The AAP actually has a customizable, interactive tool for creating a printable family media plan, which gives parents a chance to highlight the screen time rules and habits they want to enforce in their homes, and it also helps give a tangible reminder about easy-to-overlook details, like which times of the day should be screen-free, and what the other activity choices can be instead of watching TV. None of it is groundbreaking information, but it is a valuable reminder for the entire family that screen time should be moderated and there should be limits placed on the use of TV and devices (for parents too!), so having a written plan is definitely valuable.

That's not to say parents who let their kids watch too much TV at 2 years old have doomed them to a life of bad grades and junk food later on, though — modeling healthy habits and encouraging kids to get outside instead of playing video games can go a long way at any age. But it is a good reminder that screen time can affect our kids in ways we may not even realize, and that screen time limits are something that really should be taken seriously.

More Like This
A Parent’s Guide To Stomach Pain In Kids
Do Parents Really Need To Worry About Their Gas Stoves? Pediatricians Explain
Amoxicillin Rash: Is It Really An Allergy? Doctors Explain
What To Do If Your Baby Sounds Congested
What Parents Are Talking About — Delivered Straight To Your Inbox