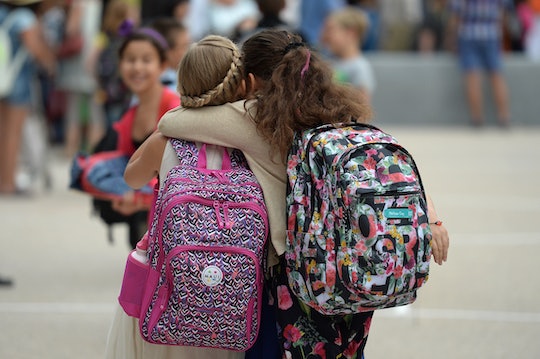 Managing a child's school and homework schedule is tough under the best of circumstances. But the ways that Common Core affects curriculums and children's school days can make it even harder. It might even be argued that one of the most divisive things when it comes to modern education is, in fact, Common Core, and it might actually all boil down to how the Common Core affects parents on a daily basis.

President Trump at the moment is planning on shaking up the Department of Education and his pick to head up the department Betsy DeVos has been one of the most controversial ones so far. Trump said on the campaign trail that he wants to get rid of the Common Core altogether — and it was long suspected that DeVos was a supporter of the policy. But DeVos issued a statement this month saying that nothing could be further from the truth.

"Have organizations that I have been a part of supported Common Core? Of course. But that’s not my position. Sometimes it’s not just students who need to do their homework. However, along the way, it got turned into a federalized boondoggle," she wrote. She added that that it sounded like a good idea when states were instituting it, so she supported the idea of more accountability and local control. That local control is exactly why no matter what Trump says, he can't just "get rid" of the Common Core.

It does matter, though, what DeVos thinks about the curriculum because the Common Core has a sneaky little way of becoming something you actually have to worry about when you send your kids off to school. Here's how.

Fractions are hard. But the way that the Common Core curriculum wants kids to work with them — and other topics — can get a little complicated. Which means that to help with homework, you have to hit the books, too. And who has time for that? Many school districts have compiled their own resources just for parents to learn what their kids are going to ask them later on. It's just a little more complicated.

Learning To Keeping Your Cool

At the same time, that homework is the kids' to do, and while it's great you want to help them out — it's really not about you or how much you learn. They have to learn it, and as long as it makes logical sense to them and they're using it to succeed in school, that's all that matters. Of course, getting tutors or after school help isn't always easy (or cheap), but complaining in the kitchen about algebra or leaving your rants about the work on social media for your kid to see can be counterproductive. It can be frustrating, but parents will need to learn keep a cool head and set a good example. No matter what you think about the curriculum, your complaints can affect your kid's attitude. And it makes the teachers' jobs all that much harder.

One big thing about Common Core: "Teaching to the test," which, according to The Hechinger Report's Jayne Ellspermann, is the notion that the material educators teach to their students is meant to be reflected by end of term or end of year assessments. According to Ellspermann, this is "designed to determine if they learned the material." Those assessments are administered throughout the year, so whatever your thoughts are about Common Core, it's imperative for parents to keep track of those things and make sure their kids are ready and up to date on their homework.

For some kids, testing is really, really hard. Not only is taking the test difficult, but for anxiety-prone children, just the thought of a TEST can get under their skin. And that means more tantrums, more sulk, more emotional mess that you have to help them work through.

Trying To Stay On Top Of It All

Not only do you need to check in with how your child will be tested and graded, but since Common Core is so controversial, many parents will find themselves at more school board meetings, teacher conferences, or just heated discussions on the sidelines of a soccer game. It's great to be that involved, but it takes a lot of energy to protest or fight for whatever you think is best for your child. All parents are dedicated, sometimes the Common Core requirements just mean you have to be even more so.

Of course, parents are the best at handling stress and juggling too many activities at the same time, so no matter what happens to Common Core, you and your family will make it — and perhaps more importantly, it will all be worth it in the end when your kid comes home and is able to show you how to add 9 and 6 the right way.