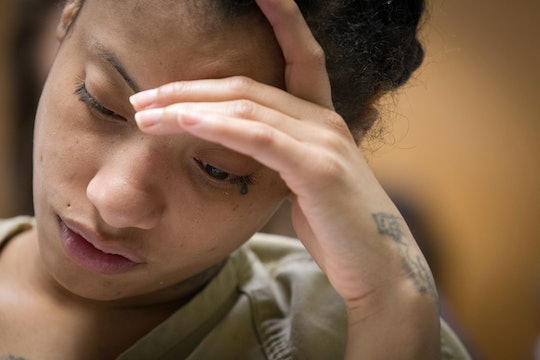 What's the worst mistake you've made as a mom? Sleeping through a night waking? Driving above the speed limit? There is likely something. But you wouldn't expect your mistakes to land you in prison. Prison — a system in which 2.3 million people are swept up, 219,000 of them women — is for bad people, we're told. Those who break the rules. "It appears the system can be avoided with good behavior, wrote Michelle Alexander in The New Jim Crow, her book on the true intent and effect of the justice system. "But herein lies the trap. All people make mistakes. All of us are sinners. All of us are criminals. All of us violate the law at some point in our lives." A closer look reveals we are destroying the lives of incarcerated mothers and their children when we ensnare them in the criminal justice system — for no real gains.

Take Nevada mother Leslie Turner, whose child was 4 months old when she was arrested for an outstanding parking ticket, as Nevada Current reported in 2016. She spent a week in jail, unable to afford the $1,500 bail, and was given Tylenol to handle the discomfort from being unable to breastfeed her infant. Or take Debra Harrell of South Carolina, a mother arrested for leaving her 9-year-old daughter at a park while she went to work, per WJBF, and as relayed by Reason. Or the thousands of New Yorkers who are arrested for turnstile jumping — a $2 crime.

Romper spoke with leading advocates for justice reform and found that, along with the young black and brown men whose lives are changed after they're arrested and imprisoned for low-level offenses, many mothers are swept up into the prison system. And when a mother is incarcerated, her children and wider family suffer the consequences.

People assume prisons are keeping them safe, instead of devastating mothers, families, and entire communities.

"Incarceration doesn't just impact the individual who's incarcerated," Amy Fettig, deputy director of the National Prison Project with the ACLU, tells Romper via phone. "It has long-lasting impacts on their families, friends, and their communities." When you imprison a primary parent, the child can very well be funneled into the foster care system or sent into the care of a distant family member.

The prevailing notion among many Americans is that if individuals didn't want to "do the time" they shouldn't have "done the crime." In an op-ed published by The Heritage Foundation, a conservative public policy think tank, writer Eli Lehrer argues, for example, that the U.S. prison system doesn't target black Americans, isn't growing "because of a search for profits," and has made America safer. "America's prison system could stand some improvement," Lehrer writes, "but we should remember that people go to prison because they commit crimes, not because others want to make money."

It is this notion that allows the fear of criminals to sustain and, in many ways fuel, the industrial prison complex. People assume prisons are keeping them safe, instead of devastating mothers, families, and entire communities in the name of political power and private profits.

"We know that actually incarceration has no positive impact on public safety beyond a certain point," Fettig says. "The recidivism rates in most communities are 70, 80, 90 percent, and that's because prison is a brutalizing experience and people do not receive rehabilitative care. They don't learn jobs they can use when they return to the community."

So many of the women who are in prison don't actually need to be there.

More than half of incarcerated women are in prison for drug and/or property offenses, calling into question just how "rehabilitative" incarceration even is.

According to Bandele, prisons do not keep communities safe but, instead, establish a false sense of safety. And that smokescreen of protection and security is being paid for by mothers and their children.

"It amazes me how they’re able to push policy through fear that isn’t grounded in anything," Bandele says. "I spent most of my life thinking that Rikers Island was a place where really hardened criminals and evil people went." But Rikers Island is a cit jail, with a large pre-trial population almost entirely due to the inability to pay bail. "People on Rikers Island are there because they can’t afford to go home while they wait to go to trial."

The bail system is set up, frankly, to make money for private contractors.

In 2016, at least 39 percent of incarcerated persons were behind bars with "little public safety rationale," according to TIME. That's 576,000 people and $20 billion dollars that could have been saved on housing them in prisons and jails across the country; money that could have been invested into communities by funding public schools, after-school programs, childcare, mental health programs, and drug rehabilitation centers.

A reported 450,000 people are currently being held in detention facilities because they're either too poor to pay bail, or are being held without bail. Sixty percent of women in jail are there awaiting trial.

"The bail system is set up, frankly, to make money for private contractors," Fettig says. "And so if people who are poor — and you know, by and large, the people who are poor are women with children — cannot pay even a few hundred dollar fines, we lock them up for very, very minor crimes. So, even if they don't actually go to prison and they're not convicted of anything and the charges are dismissed, in the few days or weeks that they spend in jail because they're too poor to pay to get out they've likely lost their jobs, their kids have been placed in someone else's care, and they've essentially lost their lives."

"It skews the one man, one vote representation," says Bandele.

The United States leads the world in the number of incarcerated citizens, and many of those citizens are mothers being detained for non-violent crimes, unable to make bail and return to their families.

That is what happened to Theresa, a 22-year-old mother bailed out by the ACLU of Arizona. She had a baby while in jail, and the state assumed custody of her children because she was detained, awaiting trial, unable to afford her $5,000 bail.

That web follows a mom, and her children, for the rest of their lives, according to Bandele. "Even if they’re able to resolve their cases and not end up in prison, there’s a tentacle connected to them in child protective services that they cannot escape. They have to report to a social worker, they get site visits, they come under this extra scrutiny that could easily get their kids sucked into foster care — just because they have an arrest and they didn’t have the money to not be out of jail."

When a child is taken away from their primary caregiver, they experience what is known as an adverse childhood experience (ACEs). As a result, children of incarcerated parents are six times more likely to become incarcerated themselves. They're at a higher risk of developing depression, an increase in aggression, antisocial behavior, psychological problems, and low educational attainment. "Your ACEs impact your academic achievement, impacts your school completion, impacts whether or not you’re going to be part of the school to prison pipeline, and it also impacts your emotional and psychological health," Bandele says. Incarcerating a parent is an adverse childhood experience for their child; one that is often, overlooked but carries devastating consequences.

"[The children] suffer from attachment disorders, are more more likely to become incarcerated themselves, and have a higher chance of suffering from learning disabilities because they didn't have a nurturing parents around in their formative years," Fettig says. "And so for women especially, who are, by a large convicted of non-violent minor crimes, I think we need to rethink why we use incarceration on people. Because they're not just incarcerating the parent. In a lot of ways, they're incarcerating the child and impacting their life in a very negative way."

So while fear of those we deem "criminals" — presumed to be different than the rest of us — is being peddled by those in power in order to keep the status quo intact, it has also ushered in an incarceration rate of 716 per 100,000 people and suppressed minority communities. The United States leads the world in the number of incarcerated citizens, and many of those citizens are mothers being detained for non-violent crimes, unable to make bail and return to their families.

As parents we're told making mistakes is inevitable; that to err is par for the course and, in the end, makes us better parents. But for many moms, predominantly black moms and mothers of color, the prosecution and punishment of minor mistakes in the name of community safety appear to be grievously hurting the very people we claim to protect.