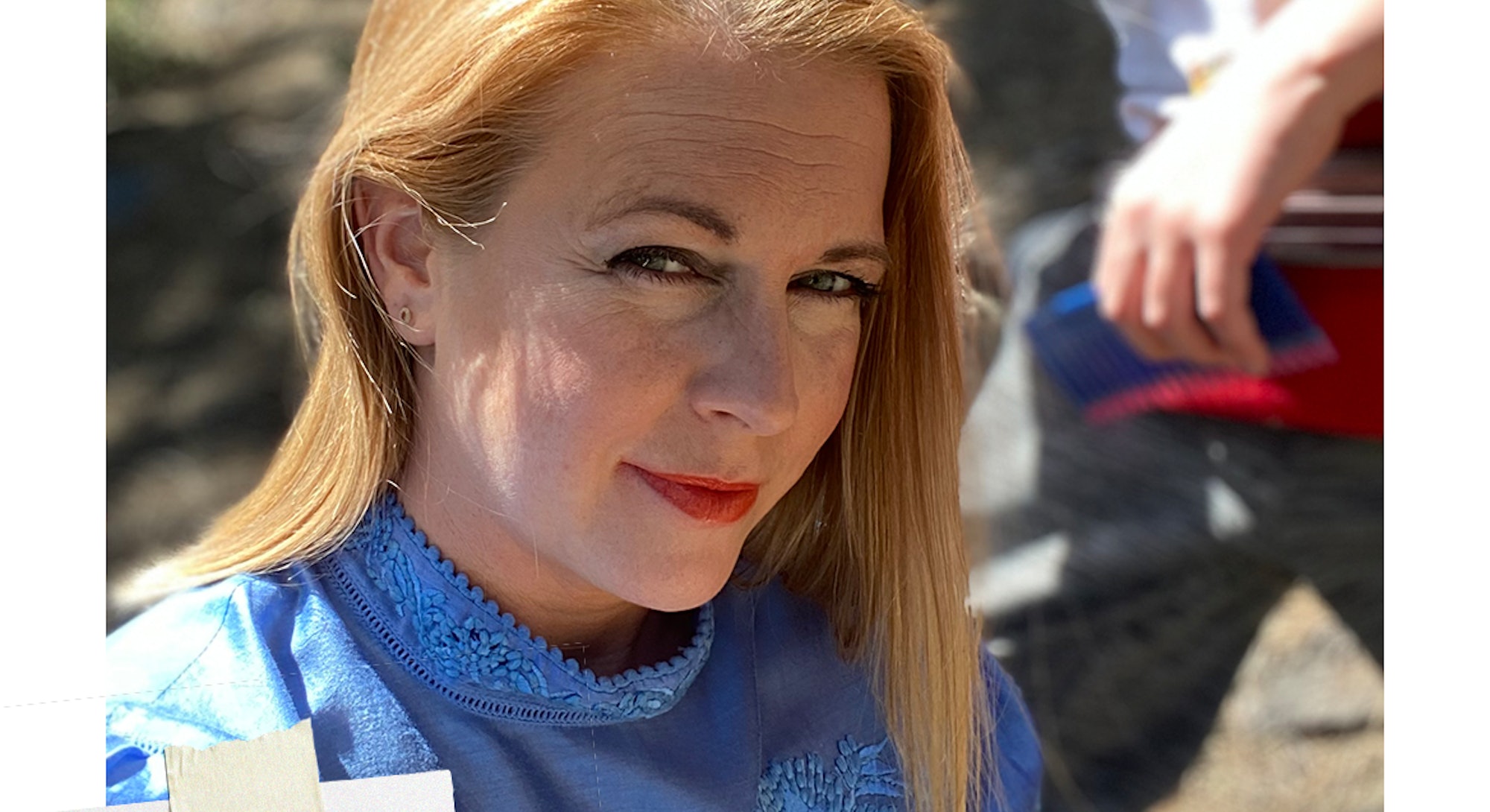 You might call it quarantine, social distancing, a total disaster — but Melissa Joan Hart simply calls it “the weirdest time.” Through the pandemic, she has been in the California woods with her husband and their three boys — 14-year-old Mason, 12-year-old Braydon, and 7-year-old Tucker — spending her days changing her doorknobs, making photo books, and trying to figure out how to make a movie when she’s nowhere near her crew or set.

On a sunny day in April, Hart and her sons hiked into the conifers for a photoshoot. As with schooling and socializing, doing press had become something Hart had to DIY, and Tucker, Braydon, and Mason were splitting duties as her stylist, photographer, and hair and makeup artist. “Do you want these cuffed?” Hart asked Tucker, gesturing at the jeans he had chosen. “No,” he answered, handing his mother some white canvas clogs. “This is much better than heels,” Hart said.

Her eldest tried to tap out after just a few photographs, before spying a pinecone. The ultimate prop. “I was torn between like, do we make it look good, or do I just really let them have it?” Hart says. “I just let them have it.” In the resulting shoot, she stands in the forest, bright as a blue jay, holding the pinecone up like an Emmy.

There was a glimmer of normality in the air as Hart talked about starting up production of her new TV movie starring Mario Lopez, school being canceled, and craving Christmas movies in summer.

Romper: How has it been, quarantined with your boys?

Melissa Joan Hart: The homeschooling thing is the hardest. Like, summer break is already hard enough when there's no structure to it. And then you throw in like, scary diseases, and now you're going to teach your kids, or they're not going to be prepared for next year. I've got one going to high school, one going to second grade, and two that were being tested for learning disabilities. So it's like, when school was canceled, I cried. 'Cause it's so hard. Having them here all day is very tricky. We've been just trying to figure out a balance.

After five weeks of at-home quarantining, we loosened up a little bit with our neighbors and just kind of latched onto their family.

MJH: We have gotten into some really good routines. We've been eating at 6 p.m., which usually, you don't know if someone's at basketball, someone's like basically taking flying lessons — we're all over town trying to figure it out. Now I'm actually, for the first time in my life, thinking about dinner at lunchtime. What are we going to do for dinner? Do we have enough food? What do we have for food? Where can we take out from someplace that we haven't taken out from this whole pandemic? So in that way, we've gotten a really good routine. Where it's like 6 we eat, 7 we meet our neighbors and we go for a walk around the block while the kids bike-ride. After five weeks of at-home quarantining, we loosened up a little bit with our neighbors and just kind of latched onto their family. About 8, we kind of get ready for bed, watch a movie — the kids have been going to bed way too late.

R: Yeah, filling this time has been such a priority for everyone.

MJH: My mom was here with us for the first five weeks, and she and I were able to knock out about 5,000-piece puzzles. Very proud of that. I’ve been writing a script, I’m on Page 16.

MJH: If someone told me I had 11 weeks to myself, I would have thought I would have read a billion books. I haven't read a single book yet. I've been busy with everything else.

They all started reading Outlander and I got to Page 7 and I was like, this thing was 660 pages. I have other things I want to accomplish.

R: Your brain just can't. I think that's the thing with having the kids home all the time. There's like no shutdown time ever.

MJH: No. Puzzles were my shutdown. Instead of actively doing something, I would sit with the puzzle with a cup of tea. But I could get up and walk away from it. Two minutes later, two hours later, you know. We switched books in our book club because nobody wanted to read what we were reading because it was too intense when this all started. Then they all started reading Outlander and I got to Page 7 and I was like, this thing was 660 pages. I have other things I want to accomplish.

MJH: I had three Shutterfly accounts and I've just been moving everything over. I finally finished that last night, although I got to go do a final check, make sure I didn't miss any pictures. We painted every wall in our house. My husband sanded and stained every deck. We changed every doorknob. I can't tell you how many loads of laundry.

We even took the kids to go rake out our church’s outdoor chapel; my neighbor and I went and packed food boxes at the food bank. [It’s about] being able to find little ways to give back. Otherwise I just feel completely useless if I'm here and I'm struggling with just schoolwork. It's not healthy to me to be doing the same thing every day. So to be able to mix it up a little with some good deeds and help give back to some other people just makes you feel a little bit lighter and gives you a little sanity.

R: How’s it been working on your new Christmas movie Feliz NaviDAD during this time?

MJH: I actually have to go make a bunch of phone calls today. We're gearing up. I think we're going to pioneer this thing. I think we're going to be one of the first productions back in. We’ve got to figure out how to get everybody up here, how to test everybody on the set, what the proper PPE is. We're excited to get back out there, give people new content, get excited about Christmas, that kind of thing.

R: I just need all the Christmas movies right now.

Interview has been edited for length and clarity.