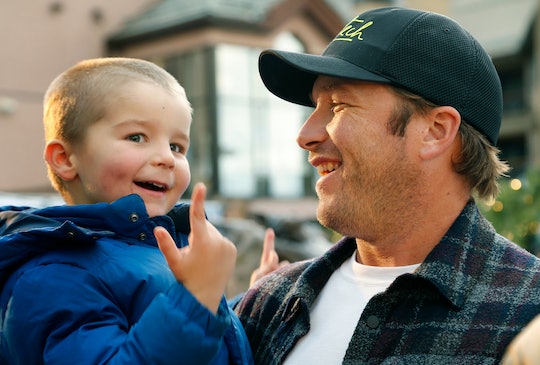 We Cannot Ask Grieving Parents To Keep It To Themselves

On Christmas Day, YouTuber Brittani Boren Leach took to Instagram to share a photo of her 3-month-old son Crew's hand in her own, and ask her followers for prayers. She wrote that she had checked on Crew during a nap and found him not breathing. "We are living a nightmare, and I’m dying inside. Please pray for my baby. This can’t be real," she wrote, her anguish raw and heavy and frightening.

The world reads these captions, these stories of mothers desperate for their children, and we draw in a collective breath. "I can't even imagine," we whisper to each other. We hold our own children a little tighter, letting our minds travel for half a second to that dark place as we push our nose into their soft hair. "I can't even imagine."

While most of the comments on Leach's Instagram post (and the ones that followed detailing her son's story) were supportive and lovely, there were many — many — judging her for sharing the story in this way. We cannot fathom what it's like to be faced with the loss of a child — but we are sure, 100%, that we wouldn't deal with it the way that she did. We can't imagine how it feels to check on your baby and find him not breathing, but we know that we would be too focused on our child to worry about an Instagram post. Donating your son's organs is excruciating, we think, but we would definitely be too sad to mention it in a caption. (How could she?)

The online world demands honesty, access, and a deep look inside the lives of moms like Leach the likes of which a TLC documentary might provide, but it punishes them for sharing something that makes us uncomfortable, or otherwise moving beyond the agreed-upon topics to discuss something as universal and unavoidable as death.

Grief is different for everyone — we all know this — but it doesn't stop people from dictating how a person, especially a mother, should grieve. Facebook has banned a mother who shared photos of her baby born with a birth defect, one mother faced backlash after sharing photos of her stillborn son in his casket, and Leach's story has reached the deep recesses of Twitter, where people have tweeted that it leaves an "unsettling feeling" for them.

You know what's unsettling? Burying a 3-month-old baby. You know what's "gross and bizarre"? Having to shop for a dress to wear to your son's funeral.

The reason my 5-year-old is learning to swim and why we ditched the puddle jumpers was because of Hughes' and Morgan's stories.

"It was very therapeutic for me to talk to the camera. To talk about my feelings and fears. Sometimes just voicing your feelings allows you to let them go," Breanne Miller, a popular family vlogger wrote on Instagram with a picture of her youngest child, Jensen. Breanne has been actively sharing Jensen's health story since he was born, and took to Instagram to alert her followers to some of the negative comments she's received in doing so. "All of that was good, but then something very beautiful started to happen. People started seeing our story and sharing with me about their trials and how watching Jensen and our family gave them strength. Watching us receive our diagnosis made another mom less nervous when she got a scary diagnosis for her child."

Grief isn't just grief — it's a story. And for some, it's a story they have to share, a story to get off their chest. Breanne says talking about her son's illness has opened the door for other moms to feel courageous and informed with their own child's diagnoses. Leach's story evolved from needing prayers to sharing how much her son's life would impact others as his organ donation saved three to four other babies. Nicole Hughes, who lost her son, Levi, in a tragic drowning accident in 2018, has made an incredible difference in the world by sharing her grief over and over again. She and Morgan Miller, who also lost her daughter with Bode Miller, Emeline, to drowning in 2018, have changed the American Academy of Pediatrics guidelines on drowning and children. I can 100% say, hand to heart, that the reason my 5-year-old is learning to swim and why we ditched the puddle jumpers was because of Hughes' and Morgan's stories.

Don't you think it's crossed their mind that you'll have an issue with it?

A mother's grief isn't just her sadness on display for attention or social media clicks. It's her life, her story. We ask for people to be real on social media, to open the door to the darkest, messiest parts of their lives, and then we attack them for it. We say they're doing it for likes, for brand engagement, for shares.

And then we turn around and ask for more details in the comments. They owe it to us, right? They chose to share these stories.

These mothers lay their grief out on the table for everyone to see and comment on. Don't you think it's crossed their mind that you'll have an issue with it? Don't you think they know that someone, somewhere, is judging them? But their grief isn't anyone else's to dissect. It's there, bubbling inside of them forever, sometimes waning and crashing, whereas your opinion on their Instagram post is fleeting, gone a few seconds later when your own healthy, alive children ask you for more Goldfish.

But I still have no idea what they're going through. And instead of judging how they share, maybe you should just thank your lucky stars that you have no idea either.