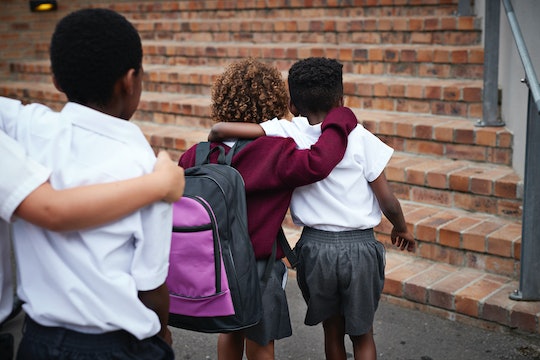 We Can't Blame Parents For Pulling Kids From Public Schools, But The Impact Will Be Huge

Back in the middle of March when my kids’ school closed for “three weeks” to minimize the spread of COVID-19, I wasn’t sure how my husband and I would manage our full-time jobs for that long with two busy children underfoot. Now, after almost six months of emergency home learning, the kids are still home and we’re hesitant to send them back to school at all.

More Like This
These 23 Teacher Appreciation Week Instagram Captions Will Show Your Appreciation
What To Do & Say When Your Child Says They Hate School
This First-Grader Convinced An Educational App To Add Black Hairstyles To Avatars
18 Best Sand Toys In 2021 For Babies, Toddlers, & Kids

Parents across the globe have some difficult choices to make right now; namely, if the risks associated with returning to a classroom are worth it, and if not, whether or not they can afford to do anything else. We already know that private education pods or “micro-schooling” is a privilege that belongs to those who can afford it, but there’s another issue at play in the background. The more families abandon public school in favor of smaller, more controlled private options, the more vulnerable we leave underprivileged kids. This is particularly true during the COVID-19 pandemic, when the shortcomings of public education don’t just impact their learning, but their health and safety.

When the concept of private education pods or “micro-schooling” began floating around my friend group, it was genuinely tempting. My son has an autoimmune condition, I have asthma, and my mother, who has Type 2 diabetes, lives with us. Even if these conditions didn’t exist in my household, I’d have the right to be anxious about sending my kids into a crowded classroom after months of sheltering in place and slowly reopening. It’s counterintuitive, to say the least, and while I want my kids to go back to school, that desire is contingent on their safety.

With low case numbers in our Toronto area suburb, we’re leaning toward sending our kids back to the classroom this fall, but plenty of others are opting out. Whitney Hartshorn, who also lives in Ontario, has chosen to keep her kids home and arrange private tutoring to complement distance learning programs provided by the public school board. Several members of her household have compromised immune systems and after consulting with her family doctor, medical specialists, and a child psychologist as well as doing hours of research herself, Hartshorn and her husband decided not to take the risk. “We would much rather our children go to school — both of our girls are very social and thrive in a physical school environment,” she explains, noting that she and her husband also work full-time. “However, due to the government’s lack of a safe return-to-school plan, we don’t have another option.”

In addition to paying a tutor, Hartshorn has purchased desks, laptops, and home school supplies. An outspoken parent advocate who has already reached out to all levels of government, she hopes that her children will return to the public school system when a safe, quality learning environment has been achieved for all students and teachers.

J., who asked us not to use her name due to privacy concerns related to her employment, is a secondary school teacher and mother of two school-aged kids in the Toronto area. She understands why parents are considering private options but hopes most will approach things as Hartshorn has and continue fighting for the public system. “My concern is if we don’t fight for public education now, what that will mean for the future of the public education system post-COVID,” she says. “A strong public education system is an investment.”

She pointed to an OECD report showing that growth in early childhood education spending correlated with lower health care costs and reduced the likelihood of children falling into social welfare. By removing children from public schooling, families of means inadvertently impact that equation.

The decision to pay for private education after experiencing dissatisfaction with the public system is nothing new, and it isn’t always about getting your kid into a top university — just ask parents of children with autism or other individual educational needs. Furthermore, private education is already a publicly-funded enterprise to some extent, most notably in the form of religious schools. Ontario alone would save an estimated $1.5 billion a year if Catholic schools were absorbed into the public system. Recent court rulings in the United States have also strengthened ties between religious schools and public funding (a move that pleased U.S. Secretary of Education Betsy DeVos). And now, with floundering school reopening plans in many areas, parents are turning to home-based privatization.

If we walk away from public education completely, we’re walking away from all of the families who can’t afford to pay for their kids’ safety.

Nora Loreto is a Quebec-based activist/writer with a master’s in Education Foundations and two young kids. She isn’t against alternate forms of education, but she recognizes a problem with the current microschooling trend. “The idea of learning pods where you join up with another family and do alternate forms of schooling or ‘unschooling,’ that’s cool — that could be potentially very radical and interesting. Where I think it becomes a problem is as a solution to COVID.”

Explaining that creative solutions such as outdoor classrooms and/or utilizing community spaces are not only reasonable but necessary, Loreto believes parents are turning to learning pods because they’ve given up hope that the government will adequately address this crisis. “When you give up in this way, you let politicians off the hook and you remove yourself from collective action, which is the only way we can force politicians to take this seriously.”

Without strong, focused, collaborative community advocacy, the public system falls apart and creates a ripple effect that is incredibly hard to reverse. Education advocates have put a $250 billion price tag on addressing U.S. public school funding and resource shortfalls, at a time when New York City school funding alone was slashed by $400 million in the latest budget. A trend toward privatization means losing public education advocates as frustrated parents give up and move on. Great teachers may forgo the public system because they want better working conditions. And when wealthy parents leave the public school system, oftentimes, so do their donations — an unintended consequence that further disadvantages those left behind. We can’t necessarily blame parents for making decisions that are arguably right for their family, but a wider view reveals the troubling aftermath.

In Canada, public school funding is managed by the province and is often tied to student enrollment in an attempt at equality (though not equity) across socioeconomic groups. In the U.S., public schools are funded by the federal government (9%), the state (46%), and local sources (45%), creating significant disparities. In both countries, there is concern that as more families withdraw from public education in favour of homeschooling or private options, communities that rely heavily on state/provincial and local funding will fall victim to even greater shortfalls.

We’re living in a global pandemic, and the last thing parents need is to feel shame for their decisions, especially when they’re prioritizing the health and safety of their children. It is completely possible to participate in individual microschooling solutions while championing the need for quality public education. But if we walk away from public education completely, we’re walking away from all of the families who can’t afford to pay for their kids’ safety. Children from different socioeconomic backgrounds shouldn’t be valued differently, and participating in a two-tiered system only widens the gap.

If you leave the public system, I won’t judge your choices, but please keep your voice in the fight. As Loreto puts it, “You cannot have universal education while it’s unsafe for certain kids to go to school.”