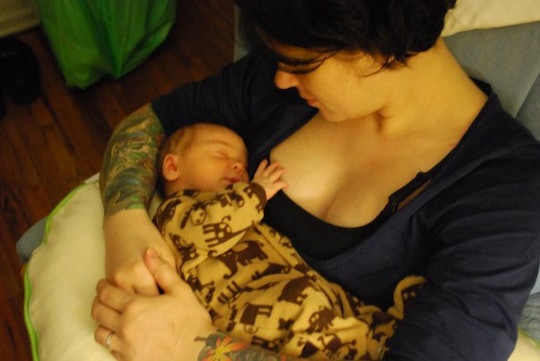 We Didn't Night Wean Because I Thought I Could Power Through

I loved nursing my daughter. I thought I would do it forever. I so loved that feeling of skin on skin, of my baby nestled into me. I loved that special connection that only she and I could have. It made me feel needed in a way nothing else ever had, and because she was an enthusiastic nurser, I also felt wanted. I nursed happily around the clock, certain I’d never run out of energy and never want to night wean and stay completely sane and rational the whole time. For the first few months of my daughter's life, my painfully full breasts and I would spring out of bed three or four times a night at the sound of her cry, instantly as cheerful and energetic as Mary Poppins, awake and overjoyed that my baby needed me and only me. My husband grunted and grumbled in his sleep, rolling over without ever so much as opening an eye. But I didn’t mind! I loved sitting in the glider as she fed hungrily. I sang to her in a whisper, stroking her forehead, her cheeks, her nose. She stayed on the boob long after she was finished eating and I let her because it calmed her and eased her right back to sleep. It was heavenly.

As time went on and she got accustomed to this, it became increasingly more challenging to put her down; it felt like every time I tried, she woke right back up, startled, surprised and almost offended that I might not want to hold her in my arms all the time. Invariably, I’d have to pick her back up and start all over again with the nursing and singing and the stroking until she dozed off again. She refused to take a pacifier and only ever wanted to be in my arms, latched on to me.

I powered through for as long as I could, spending months dozing in the nursing rocker.

Eventually I accepted that her crib was going to stay empty. I bought myself an iPad and took to the glider at night with it and my earbuds. I juggled the baby in one arm and propped up the iPad with the other, trying not keep baby fingers and toes out of the knotted wires. Then I binge-watched my way through entire seasons of shows I’d never had any interest in. I love this, I told myself. My baby sleeping in my arms! This is the best feeling. Just me and my baby. The best moment.

The problem with that was my sleep. I powered through for as long as I could, spending months dozing in the nursing rocker when I was lucky, absorbed in Netflix when I was not. But I was tired and the newness of motherhood was no longer enough to keep me energized around the clock. I’d often conk out sitting up in a tangle of wires and iPads and babies and burp cloths and blankets. Once I was out, nothing but my baby could wake me, but the light from the iPad was sometimes enough to wake her, and then we were both up and back at square one. Over time, this wore me down. I missed my bed. I began to resent my husband for getting off the hook just by virtue of being cisgendered and male. “I’d help if I could,” he protested during the day when I complained that I had to do nighttime all night every night. Parenting is a 24-hour job, I insisted. “Do you want me just to get up with you to keep you company or something? That’s silly. Why should we both be exhausted?” he responded.

I was a zombie, and something had to change. I decided to try bed-sharing. I’d been too afraid to bed-share when she was a newborn, because she was so tiny. What if I rolled over on top of her? What if she fell off the bed? The books I read said that the maternal instinct would prevent this from happening, but she was so very little. Now she was a few months older and a solid baby. But I was so tired from sitting up night after night that it wouldn’t have mattered. We practiced nursing lying down. I lay on my side and I propped her on her side facing me. She nursed greedily as always, and I think I fell asleep before she did. Soon, she slept too.

It didn’t matter that my husband often got up to sleep on the couch because there wasn’t enough room in our queen-sized bed for me, him, and the baby. I was getting sleep finally!

This worked well for the next few months. I got enough rest that I finally felt almost like a fully functioning human again. I felt sane, and I thought I had it all figured out. We would bed-share for as long as it took. It didn’t matter that she had her own crib in her own room that lay empty night after night. It didn’t matter that my husband often got up to sleep on the couch because there wasn’t enough room in our queen-sized bed for me, him, and the baby. I was getting sleep finally! Eventually I even learned to pull my nipple out of her mouth without waking her, so I was able to sleep not only on my right side, but on my back, on my belly. It was glorious.

For months we bed-shared peacefully. For almost a full year of her life, I’d snuggled my baby all night in some capacity. She’d gotten all the boob she wanted, and I’d eventually gotten to sleep. Teething changed all that.

I felt fortunate that her teeth started coming in late, but when they finally did, she was far more wakeful and restless at night. Worse, she started to bite, and she seemed to think it was funny when I yelped in pain. That was my breaking point. I could not tolerate being wakened by my little vampire chomping down on one of my tenderest spots. It was time for her to sleep by herself.

It was no easy feat to get her into her crib, but eventually we did. By that time, she wasn’t nursing all night long so I didn’t wean her at the same time. By the time she was fully transitioned into her own room, she was only nursing once or twice a night, and I was still sleeping well for a few hours at a time. I felt like we finally found our groove, and we could have kept that going forever, except that I got pregnant, and my breasts became so tender that I had no choice but to wean her quickly, before either of us was ready. This helped me prepare for baby number two without ever having truly lost my sanity night nursing baby number one. By the time the second baby came along, I’d gotten some great rest and was ready to do it all over again.