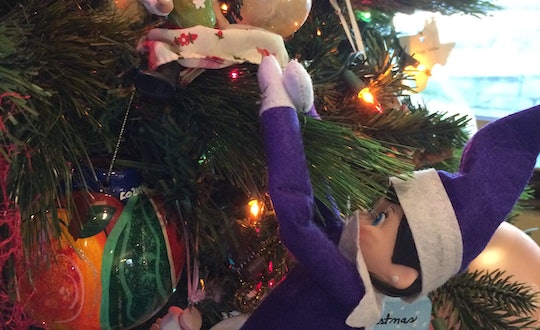 We Do *Our* Version Of Elf On The Shelf, But Not For The Reason You Think

Ever since I realized that my breastfeeding "success" was as much luck as my sleep-training "failure," I refuse to get in a pissing match with other parents. Each winter when social media is flooded with Elf on the Shelf dread and elaborately staged humblebrags, I just dig through our Christmas boxes for Holly Twinkle and mind my own biscuits.

Holly Twinkle is a $4 doll I found in an antique store a few years ago when my kids were asking why their friends have elves and we don’t.

Our family doesn’t have an Elf on the Shelf, but we do have a little holiday visitor who dusts our house in magic each year. Holly Twinkle is a $4 doll I found in an antique store a few years ago when my kids were asking why their friends have elves and we don’t. I like the idea of my kids waking up to a little magic every morning, but I didn’t think a Snitch like a Bitch was going to work in our house. My youngest has been battling some serious anxiety, so telling her that someone was in her house watching for her to mess up wasn’t the way I wanted to go.

I’m not knocking anyone who has an elf and uses it to “inspire” good behavior during the holidays. My friends have them and the myth works great for them. I’m a kid at heart, so any holiday magic parents bring to their kids is wonderful to me. The Big Brother surveillance factor of their elves is balanced out by the cute little marshmallow mess mischief, and their kids adore it. One friend even passed on the Elf responsibilities to her older daughter when she stopped believing. And now she gets to feel the joy of bringing magic to her brothers. It’s beautiful.

But I’m doing good to get my kids to school five minutes after the tardy bell, so our holiday creature has to have flexible rules. For instance, Holly Twinkle doesn’t move every night. I’m a hot mess, and I don’t want my kids’ Christmas magic ruined because I was binge watching Riverdale all night and forgot to move their elf.

She’s a kindness fairy, and her magic is more intermittent. She gets charged up when she sees people being nice to each other, so she’ll just randomly move from time to time. We haven’t discussed any sort of negative repercussions for bad behavior. She doesn’t report back to Santa with naughty list fodder. She just hangs out and writes notes to give my girls ideas and hints about ways they can bring joy to others. She’s basically training them to be kindness fairies like her. #careergoals

She’s also a total extrovert. The Elf on the Shelf is great because it teaches consent. You’re not allowed to touch it or it loses its magic. And that’s okay. If those are the rules the elf has set for itself, then I love that kids are learning to respect that. However, as an extrovert myself, I thrive on human contact. So our fairy loves affection. Hugs are a great way to charge her magic. My kids need touch, and Holly Twinkle welcomes it. Plus I don’t want to get busted stealing anyone’s magic if Holly falls off the shelf into the dog’s water dish.

The other thing that Holly Twinkle has to offer is year-round support. Last Christmas my youngest was struggling with a medical condition that causes extreme anxiety.

It was hard to get her to walk into school because she was afraid she’d never see me again. She didn’t even want to go to the bathroom alone at home. I realized that when Holly Twinkle was around Violet felt a little more secure. So at the end of the Christmas season Holly left the girls a little snow globe (that I bought for a dollar). Her note said they could use it to talk to her anytime they wanted. Thank you Tim Allen and the Santa Clause, circa 1994.

Violet carried that tiny snow globe in her pocket for the entire year. And Holly wrote her notes from time to time to remind her that she was getting all of Violet’s messages. She even offered to put in a second line so that Violet could talk to me anytime she was away from me. It didn’t solve all of her separation anxiety. But she was able to go to the bathroom alone, and she stopped crying when she went to school.

Our approach is a bit different than the traditional elf, but again I don’t claim to know what’s best for anyone else’s child but my own.

A kindness elf, fairy or any other creature gives parents a tool to help teach their children positivity.

I spoke with two experts about the benefits and risks of having these little Christmas creatures.

“I like the idea of an elf giving ideas on how to be kind and spread joy,” said Dr. John DeGarmo, of the Foster Care Institute.

DeGarmo said in today’s society, children are bombarded with negative messages through television, movies and social media. Violence, hate speech and negative images are everywhere. But a kindness elf, fairy or any other creature gives parents a tool to help teach their children positivity. It’s a resource in the importance of good manners and human decency even at a young age. “In today’s society, this message is one that is more and more difficult to be heard,” he said.

Dr. Fran Walfish, a family and relationship psychotherapist, author of the Self-Aware Parent and co-star on WE tv, said she prefers the kindness creature version because the original Elf on the Shelf risks creating within the child, a constant worry about being “bad or good.”

She said using a snow globe or other “talking tool” is a useful strategy that’s often incorporated in therapy when a child experiences scary nightmares or other fears. “The child can use the snow globe to talk to as a special communication tool that facilitates the child expelling negative worries, so they are outside of her body and gone.”

The main benefit of an Elf on the Shelf, Kindness Fairy or Hannukah Narwhal is that it establishes a positive family tradition. And that alone is worth all the marshmallow messes.