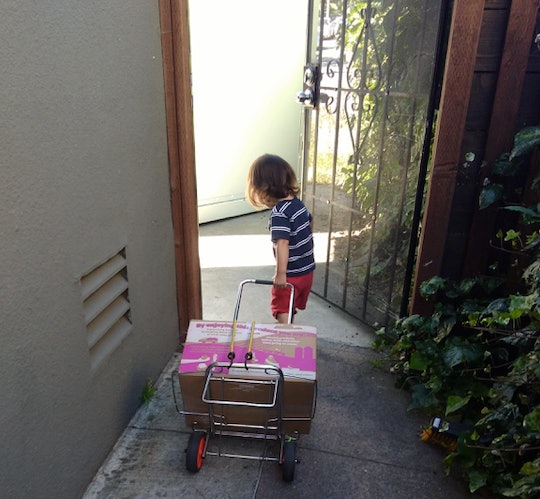 On June 14, 2019, at 3 p.m., my family and I left Oakland, California for good, in no small part because of the ongoing threat of California wildfires.

As I loaded my family into our car and drove away from our home, I thought about the night I woke up at 4 a.m. to the smell of smoke. My 2-month-old baby, Tyler, was asleep on my right; my partner, Erick, on my left. My 3-year-old, Emmett, was asleep in the other room. I walked through my house and all around the outside, then stood on the second floor balcony, straining to see the source of the smoke. My partner, inside with the sleeping children and waiting for my evacuation order, found the first news reports of the Tubbs Fire. It was 60 miles away, sending out such a massive amount of smoke that Oakland's 911 system was overrun by callers. We went back to sleep, only slightly reassured. The fire wasn't near us. Yet.

I also thought about the day I walked out of Emmett's science fair with both kids and, once again, was alarmed by the smell of smoke. I turned and saw a column of black smoke in the distance. A fire was burning 1.7 miles away, in the woods where my children and I played at least once a week.

My family is among a growing number of people who are relocating because of the number of California wildfires. But we are lucky. We didn't lose our home, like many of our friends have. We didn't even have to evacuate — to run with flames at our backs — as several friends have been forced to do. We didn't have a family member go missing in a fire, as another friend of ours did. And we haven't personally lost anyone, or anything, to a wild blaze.

And yet, my family had to leave.

Because more fires are coming. We don't know when or where, but there will be more disastrous fires that will ravage California, destroy homes, put families in harm's way, and take lives.

The famous "golden hills" of California refers to how the grasses all dry out — becoming yellow, brown, or, if you're feeling poetic, "golden" in the summers. Families understand that droughts and fires are part of California's normal. But climate change has intensified this "normal," bringing with it high winds, which turn a typical wildfire into a speeding inferno, spreading fires across thousands of acres. Years of fire suppression and mismanagement of wildlands have allowed dead trees and brush — fuel — to accumulate, increasing the amount of fires per year. And years of maintenance neglect by power company PG&E are alleged to have caused several of California's worst recent fires, which are now coupled with massive power outages.

It seemed reasonable, when vetting babysitters, to try to imagine if they could successfully evacuate our children from a raging wildfire.

I don't want this new normal for my children. And I knew that if we stayed in California, it would be.

That inevitability became irrefutable during an unplanned layover in another city, while traveling to visit family. While standing on the airport curb, waiting for the hotel shuttle, Emmett turned to me and said, "Mama, put my mask on," a sense of urgency in his little voice. "Why?" I asked, thinking the exhaust of the cars picking up and dropping travelers off must have been bothering him.

"Because we're outside!" he replied. He was 4. And, at just 4, he had started to believe that it was perfectly normal to wear an N-95 respirator mask every moment he steps outside of his home.

And I've come to realize that, when living in California, my heart was splintering on a daily basis. Like when I found out about the Camp Fire in Paradise, California. Friends of ours who lived in Paradise could feel the heat of the flames as they fled. I don't know if they were among those who escaped by car, or those who abandoned gridlocked cars and sought safety on foot. Another Oakland friend couldn't get in touch with her father, who lived in Paradise, for several days. He turned up safe in an evacuation center — but 85 other residents of Paradise did not.

Why did the Camp Fire turn into a devastating blaze and the fire near me did not?

I have no answer. All I had, when living in California, was fear.

We didn't even realize what worries we were living with until we moved away. Living under the threat of a potential wildfire had become normal. But now, in stark contrast to a serene, fireless midwestern life, we've been able to see how scary it all was. We've been able, emotionally, to afford to acknowledge how scary it was, now that we've escaped the danger zone.

We hadn't been harmed yet. And maybe we never would be. But were we supposed to stay until we were?

The specter of fire leaked into our daily lives, into the mundane planning of the kids' activities and schedules. We could imagine, foresee, and plan for the terrible "what ifs." We had visualized the process of trying to round up our wandering children if a forest fire broke out while they played in the woods. We had mapped out the exit routes and made calculations about whether our families could escape in time.

It seemed reasonable, when vetting babysitters, to try to imagine if they could successfully evacuate our children from a raging wildfire. Could they take care of the kids for a few days at an evacuation center, until we were able to locate them and make our way there to reunite?

It was normal to keep the gas tank at least a quarter full, to make sure we had enough gas to flee.

It was normal to expect there'd be weeks, every fall, where we couldn't go outside at all, due to smoke containing an unknown cocktail of toxic chemicals, including the incinerated remains of cars, lead paint, and Ikea furniture.

I can't count how many nights I lay awake thinking through scenarios, mentally checking and re-checking our "go bag" and emergency supplies. Drilling myself on possible evacuation routes and scenarios. If the fires were coming from the forested hills to the east, would we be better off fleeing towards the water or heading south? Would we be more likely to get caught in gridlock if we tried the freeway or stuck to surface streets? On the way out of the house, if I only had a few seconds, what did I need to grab? Two children, partner, car keys, glasses (so I could see to drive) cell phone, and go bag... if we had a few more seconds.

One late night after another, imagining disaster scenarios. The constant waiting — waiting for the first rains of fall, waiting for fire season to end, wondering if we'd make it through another fire season without disaster close to home?

I've wondered whether it's fair to say I was "forced" to leave. To say that we "had" to move. But I want to acknowledge that the fires were part of what made life untenable for my family in Oakland.

We are privileged in that we have a clear out: a loving family who had been nagging us to move to Chicago, Illinois, for years, the means to leave, and the economic flexibility to find and secure new jobs. It hasn't been cheap or easy, but it has been possible.

The threat wasn't personal. We hadn't been harmed yet. And maybe we never would be.

But were we supposed to stay until we were?

To help those affected by the ongoing California wildfires, donate to the California Fire Foundation.