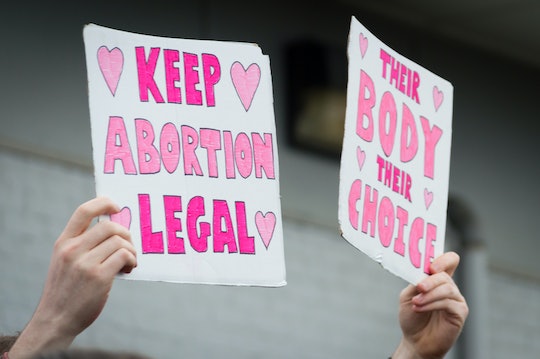 We Need To Listen To Moms About Abortion

A lot of people have a lot of opinions about abortion. Politicians running for office will stand on either a pro-choice or anti-choice platform, legislators endlessly debate whether or not the right to choose is just, and voters pontificate on the morality of abortion access. But there’s one group of people we should be paying attention to most, especially if bodily autonomy is going to continue to be open for debate: mothers. Yes, we need to listen to moms about abortion.

As the country nears the 2018 midterm elections, two new polls show that the issue of abortion and abortion access are among the top issues for voters, and Democratic voters in particular. A reported 47 percent of Democratic voters define abortion as a "critically important issue to them," and 40 percent of Republican voters say the same. Which is why, of course, abortion remains a highly debated political talking point. Sadly, mothers are often left out of this discussion, even though moms are most impacted by the lack of abortion access.

According to the Guttmacher Institute, 59 percent of all women who have abortions already have at least one child at home. In other words, more than half of all abortions are obtained by people who already know what it's like to carry a pregnancy to term, birth a baby, and raise another human being. They know how their bodies handle pregnancy, they know the intricacies of their medical history, and they know their very specific life circumstances and how they would be impacted by the presence of another child. When it comes to the true impact of parenthood, no one understands it better than parents themselves.

I am one of the 59 percent of women who have abortions after they've already had one child. I know what it's like to be pregnant, to carry a pregnancy to term, and to birth a child. But I also know what it's like to have every single pregnancy plan you've formulated in your mind go out the window... and in the worst way imaginable. I lost my first child, my daughter, to premature birth. And while I was able to carry my second child, my son, to term, the pregnancy and the labor and delivery were incredibly hard on my body. My pregnancy was high-risk, I had to endure weekly hormone shots, I was put on bed rest, and I had an emergency cerclage put in place to help deter pre-term labor. My body, and my mind, suffered throughout my pregnancy, and in ways no one else could possibly imagine unless they've been exactly where I've been and survived exactly what I have survived.

Mothers, not white male politicians in positions of power, know the cost of motherhood and, sadly, know that the country isn't going to support them when it comes time to provide and care for their children.

So when I found out I was pregnant again, after my son was born, I knew what I could and could not handle. I knew what I was willing to put my body and my mind through, and what I wasn't. I made the choice to terminate that pregnancy, and I knew, better than anyone, that my choice was the right one for me and my family.

I was living in a low-income household when I had my abortion, relying on the Supplemental Nutrition Assistance Program (SNAP), Women, Infants, children (WIC), and Medicaid. So not only did I weigh my physical and mental health before deciding to terminate, but I also looked at my finances and the financial status of my family. According to the Guttmacher Institute, 75 percent of abortion patients are poor or low-income, and 49 percent live below the poverty line. When you’re living paycheck-to-paycheck as a mom, you're acutely aware of just how difficult it is to provide for a family on a budget. You don’t have the luxury of hiring sitters or nannies while you go to work, much less while you have a date night or a simple afternoon to yourself. You don’t have the Pinterest-perfect baby nursery. You’re lucky if you can afford diapers that week.

The United States is the only industrialized country without mandatory paid family leave. Only 12 percent of women have access to paid maternity leave, and a reported 25 percent of moms return to work a mere two weeks after giving birth. Currently, working moms are paid 71 cents for every dollar working dads make. According to a survey by Care.com, the cost of child care rose for the fifth year in a row. Mothers, not white male politicians in positions of power, know the cost of motherhood and, sadly, know that the country isn't going to support them when it comes time to provide and care for their children.

And while there are a number of reasons why women have abortions, separate from the cost and physical and mental toll of motherhood and pregnancy, until this country does a better job of caring for moms women will continue to have abortions.

Like many other mothers in the United States, when faced with an unplanned pregnancy and the undeniable truth that I would be digging myself and my family into a deeper financial hole if I carried the pregnancy to term, I had an abortion. And I know, without a doubt, that my abortion was the best decision I could have made for myself, my body, my mental health, my family, our finances, and our future. And while there are a number of reasons why women have abortions, separate from the cost and physical and mental toll of motherhood and pregnancy, until this country does a better job of caring for moms women will continue to have abortions.

Of course, the financial implications are but one piece of the puzzle. I also had to worry about my continued health, both physical and mental. The United States has the worst maternal mortality rate in the developed world, and that mortality rate disproportionally impacts black women and women of color. In the United States, black women are three to four times more likely to die from pregnancy complications than white women. I was acutely, painfully aware of how another pregnancy could impact my body and, as a result, my quality of life. I wanted to be around for my son; watch him grow up; be present at every monumental and seemingly insignificant moment of his life. I valued my physical health, and didn't want to put myself in another potentially dangerous or deadly situation. Because yes, many women can and do carry their pregnancies to term without physical complications, but I was not one of those women. And I know I'm not alone.

So sure, you could continue to listen to President Donald Trump and Vice President Mike Pence about abortion — the former of which has even been accused of paying for an abortion. You could care what white male senators like Sen. Paul Ryan (R-WI) and Lindsey Graham (R-SC) say about abortion access, even though they'll never know what it’s like to carry a pregnancy to term, or have a pregnancy labeled high-risk, or lose a baby to premature birth. And you could continue to give people like Abby Johnson and Michelle Malkin the time of day, who spread misinformation about abortion to whoever will listen in an effort to strip women of their constitutional right to abortion access.