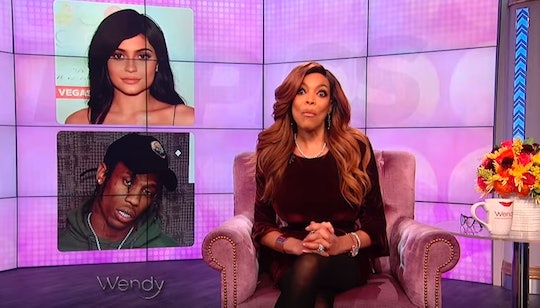 When someone is expecting a baby, the last thing they need is a firestorm of drama and insults. And, whether Kylie Jenner is actually pregnant or not, she shouldn't have to deal with negativity from her fans or fellow celebs. Maybe you've heard, but Wendy Williams threw some insults at Kylie Jenner about her rumored pregnancy and it pretty much came out of nowhere. It all seemed totally unnecessary and just... well, mean. Romper's request for comment from Williams' rep regarding the segment was not immediately returned.

In a time when Hollywood is focusing on empowering women and building them up, it's strange that one of the biggest morning talk show hosts would spend part of her morning tearing a fellow star down. We all know that Jenner has been keeping herself out of the public eye and the rumors continue to pop up, claiming Jenner is allegedly expecting her first child with rapper Travis Scott. Unlike Jenner's Kardashian sisters, if she is pregnant, she has chosen to keep this moment in her life private, which is totally OK.

But, let's get down to exactly what Wendy Williams said about Jenner. In the below video, Williams started out by praising Jenner's sister Khloé Kardashian's own baby announcement. She then transitioned into focusing on Jenner's "pregnancy mystery".

In her rant of insults, Williams claims that Jenner was in hiding because she was pregnant and her boyfriend had dumped her. Williams even said that she's allegedly seen Scott out with other girls. She referred to Jenner's relationship with Scott as a "split and run." In a cruel and unfounded claim, Williams said that Scott's reaction to Jenner's rumored pregnancy was, "Whoop, you're pregnant. Figure it out and I'll pay child support from afar." Let's forget for a split second that this is a pretty messed up statement to make about a reportedly pregnant 20-year-old. Who here thinks that even if this story were vaguely true that Jenner would have any kind of problem financially caring for her own child? With the Jenner-Kardashian empire under her feet? Yeah, right.

Next, Williams talked about the two-night Keeping Up With The Kardashians event that is taking place this coming Sunday and Monday. In a preview of the episodes, Monday night's show appears to be the reveal of Khloe Kardashian's pregnancy to her family. But, it also shows Kardashian on FaceTime with Jenner, who looks like she is in bed while on the phone. Fans are hoping that Jenner uses that opportunity to reveal her own rumored pregnancy. But, Williams said she doesn't think Jenner will announce her baby news on this episode.

Williams then went on to question the reported pregnancy altogether, asking the audience, "Are we being bamboozled?" She then cruelly mocked Jenner's lip injections, even though Williams has admitted to having plastic surgery herself in the past. Williams said:

You know, she's only 20. You know what I mean? Remember when you were 20? You didn't want anything to do with a baby. But, you know, her 20 is more like 35 because she's grown up on TV in front of us, plus, she's got the mid-crisis makeover already. Let me tell you something. You can do whatever you want to yourself, but the baby is still going to look like the old you.

A Lot Of People Weren't Happy With Williams' Comments

Throughout this verbal attack against Jenner, Williams tossed around so many topics. She talked about Scott not addressing the pregnancy rumors, brought up Jenner's older ex-boyfriend Tyga, and even went as far as saying that once the rumored baby is born, Jenner's parenting skills will be totally judged. Raise your hand if you think any new mom shouldn't have to deal with being judged.

According to Seventeen, Jenner has not addressed Williams about her unfounded and unprovoked rant. Hopefully she'll think more about how words can hurt, rather than how to get some ratings.