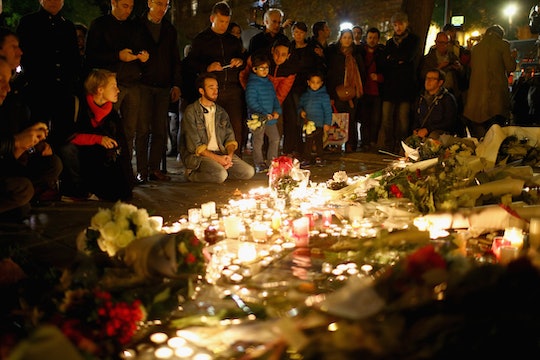 We're Talking About The Paris Attacks, But Why Aren't We Talking Kenya & Other Countries Fighting Terrorism?

The world is still mourning the violent attack on Paris, France that occurred on Friday, November 13. More than 120 people lost their lives (with more than 80 killed in a singular attack at the Bataclan), while over 300 were injured, 99 critically. Three explosions and six shootings took place in several locations in Paris, helmed by a reported eight militants. What happened in Paris was tragic. Ugly. Shameful. Digusting. But horrible things happen elsewhere too, and sometimes we forget that.

As details continue to pour in and the names of the victims are released, people around the world are showing their continued solidarity, sharing their prayers and thoughts for the people of Paris. Facebook profile pictures have changed, filtered with the colors of the French flag. Memes and poignant pictures are everywhere, calling for prayer and solemn, sympathetic thought. Though it is difficult (and honestly, wrong) to condemn any one person's way of mourning such a violent and horrific loss of life, the tragedy in Paris is a reminder of other countries and their continued struggle with unbelievable and unending violence.

Paris has grabbed the attention of the world, and rightfully so, but talking about Paris should remind us that we should be talking about other countries too. Why haven't we talked about Kenya, where 147 people were killed after Islamic extremists stormed Garissa University College? Why aren't we sending tweets to Swahili, showing our support? Why haven't we talked about Lebanon, where 41 people were killed after a deadly bombing in Beirut? ISIS proudly claimed responsibility, but Facebook isn't offering a photo-filtering option with the colors of the Lebanese flag.

It's a difficult topic to broach, one about as complex and multifaceted as the world we call home. Talking about Paris is important — there is no denying or ignoring that — as is showing the people of the City of Lights that we mourn for them and stand by them. And wondering what's happening in the rest of the world doesn't mean that Paris is a distraction or that it's wrong to be sad and to be scared and to filter your Facebook photo.

Mourning the loss of human life at any level is not wrong. Paying attention to Paris is not naive or misguided or disrespectful. Focusing on Paris is important. But shouldn't Paris remind us of our duty to each other and to humankind as a whole? Shouldn't Paris be a reminder that we should reach for kindness before giving in to hate? Shouldn't Paris remind us that the rest of the world needs us? That countries like Kenya and Lebanon and cities like Beirut are not to be forgotten? That their cries, however silent, should pierce our ears just as loudly?

Tragedy is a cruel mistress. It is painful and unforgiving and merciless, and it comes at the cost of innocent lives. It is also binding and unifying, serving us unwanted meals of perspective. Tragedy rids of us our natural inclination toward pettiness and forces us to embrace and uplift complete and total strangers. And the Paris tragedy has brought to light tragedies in other countries that we've sadly failed to pay proper attention to.

That is a good thing.

That is the ultimate memorial we can pay for all the lives lost that fateful Friday night. Stepping back from the mundane routines of our day-to-day to see the bigger — one not clouded by, for instance, the color of a Starbucks cup — that is what tragedy can teach us. And it doesn't matter if it's the tragedy in Paris or Kenya or Lebanon. How we react matters.

Talking and teaching and doing better is how we curb insensitive and racist reactions to violent cruelty. Because when we open our eyes a little wider and expand our hearts a little further, we can see that it's the same horrific violence we're all running from. Others are quick to blame open borders and refugees for the terrorist attack in Paris, but we're all fighting the same common enemy. We may have different methods and different goals, but we're moving toward the same finish line.

Our miraculous ability to be empathetic to all is a part of human experience worth highlighting, especially and certainly at a time like this, when the world seems dark and people seem evil.

Now, when we look at what's going on in the corners of the world otherwise ignored, we should remember that the Muslim population has suffered more losses at the hands of Islamic extremists than any other population.

We should remember that one fateful day, a day that will forever be remembered in Paris and around the world, is just a normal Tuesday in other countries. And until we're able to look at the entire world and care for it equally — regardless of race, religion, nationally, and creed — we'll continue changing our Facebook profile pictures in acts of solidarity far more often than we should.