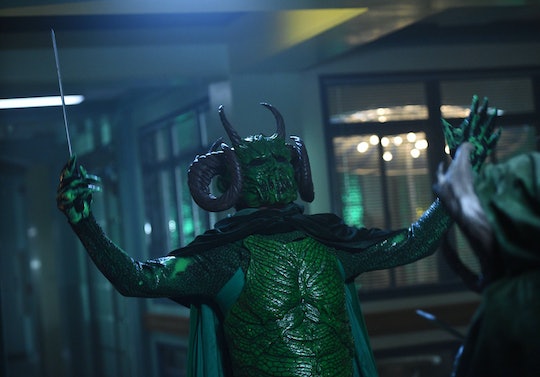 Everyone wanted to know what Wes (otherwise known as Grace's hot dad from Season 1) was doing back on the show, and it looks like we just got our answer, folks. Wes is the third killer on Scream Queens and it is a major game changer. And not only because we had to say goodbye to yet another likable character. Wes arrived on the scene with a bellyache that turned out to be caused not by a tumor but by a giant hairball in the pit of his stomach. He said it developed from a nervous habit of pulling out his hair and then eating it. But as he revealed later, this was not actually the case.

It turns out that Grace is not actually at Stanford University like he originally stated. She's now at Stanford the mental institution after having been driven completely insane by the Chanels at school. She's not even wearing hats any more! So in order to get his revenge, Wes decided to become a patient at the C.U.R.E. Institute by eating a ton of hair he bought from a salon (gag), and then just piggyback on the other two Green Meanies already attacking the hospital. No one would suspect him because there was already a serial killer on the loose there. You gotta admit, it's not a bad plan.

We only know all of this because Chamberlain found a bit of a Green Meanie costume and some receipts for a chainsaw and a machete among the nasty hairball remains and decided to confront him with it. I just don't understand how he and Zayday haven't learned not to go psychopath hunting alone yet. Anyway, immediately after confessing his intentions to kill all the Chanels and thus get his revenge for poor Gracie, Wes obviously had to dispose of Chamberlain — which he did with a knife to the gut. Poor Chamberlain, gone too soon.

But more importantly, what does this mean for the Chanels and for the hospital going forward? The original Green Meanies just want the place shut down, but Wes won't rest until the Chanels have paid for the psychological damage done to his daughter. She sided with Katy Perry in the Katy Perry and Taylor Swift feud for God's sake! The Chanels seem to realize they're being targeted, but will they figure it out before it's too late? Considering that the brains of the operation, Zayday, is currently trapped in a pit (again), it's looking fairly unlikely.