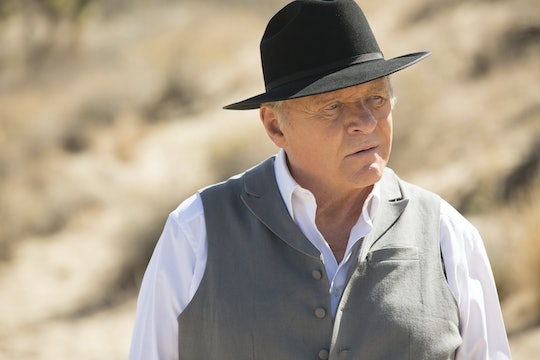 By now, I think we're all in agreement that Ford isn't exactly a good guy on Westworld. But after we saw a little bit into his history, we were left with even more questions than before. Namely, about Arnold, his former partner who was with him at the start of the park's creation. Unfortunately, we didn't find out much about Arnold, except that he was supposedly killed in an accident long before the park really became established. But these Westworld theories about Arnold play on both Ford's past with him and what Ford claims to have happened to his former colleague and BFF.

In Episode 3, we were given a little bit of the backstory of Westworld and how Ford and Arnold programmed the first hosts, teaching them to do human-like movements and act as such. As he explained the past to Bernard, you kind of got the feeling that Ford was holding back and when he mentioned how Arnold died, it was with a quick, non-explanation that referenced some sort of an accident. But we know better, don't we?

We haven’t yet met Arnold on Westworld via flashbacks or otherwise, so it's hard to get an accurate handle on his character. But he's an important figure from Ford’s past, which just makes him all the more intriguing and the Westworld theories about him are quick to question pretty much everything Ford has said about him. For example....

Arnold Is Someone We Already Know

When Ford takes out this old photo of himself and who he says is Arnold, you notice a huge empty space next to the man who is supposed to be Arnold, but according to Redditor BaelBard, that's because the real Arnold is actually in the blank space, we just can't see him. The Redditor goes on to say that if Bernard is actually a host, as many have already theorized, then we're seeing things through his eyes and he might be programmed to not see certain things, similar to how Dolores couldn't properly see that Times Square photo, claiming that it didn't "look like anything" to her.

They also point out that while Ford claims the other man in the photo is Arnold, that character already has too much significance to be a man we've never seen before, thus taking away any shock value. Instead, the "real" Arnold is in fact someone we already know, but who was given a different name.

Another theory about Arnold on Westworld is that he's still alive and well and has actually been living in the park for the past 30 years. Why? User Eupatorus on Reddit posted the theory that he faked his own death years ago, when the park broke down, and he went to the center of the elusive maze to continue his research with the hosts and the possibility of artificial intelligence.

According to the theory, Ford knows that Arnold is still alive and while Arnold continues his research into helping the hosts become their own beings, Ford is intent on continuing to be the "God" of Westworld, controlling each host.

He Died Trying To Become A Host

Maybe Ford was being honest in his claim that his old partner, Arnold, died while working on the park. But he still could have been shaving some of those details off the top. The theory that Arnold was trying to do more than just create hosts, but actually become one, plays on that. Matt_Something posted the theory that Arnold is dead, but dies while trying to transfer his own consciousness into a host body.

It was also Arnold who created the code in the hosts that caused the opening of their minds to be triggered when the words "These violent delights have violent ends" are spoken.

There Never Was An Arnold

This theory goes back to the idea of a conscious host, but instead of Arnold being a man trying to become one of them, the theory posted by Redditor Silentgraphic says that Arnold is a conscious host that Ford himself created as a sort of assistant, but then Arnold started creating other conscious hosts and eventually the incident that closed down the park 30 years ago happened and all of said hosts had to be shut own, including Arnold. Silentgraphic says it would also explain why Ford always seems to make it a point to remind everyone that the hosts aren't real people.

While the Man in Black is a Westworld mystery all on his own, tokamak_2000 has a theory that the MIB is intent on finding the maze for a very specific reason. The theory goes that Arnold is hiding from Ford in the center of the maze, and so Ford sent the Man in Black to go get him.

It would explain why one of the engineer's previously said that the MIB is allowed to do whatever he wants. In this case, it would be because he's working for Ford, trying to get to Arnold, who has been using his own technology to get into the hosts' programs to make them more self-aware and conscious.

It's still so early in the series to know much about Arnold on Westworld, but you kind of have to expect him to have much more significance than a former creator who died and just leave if at that. There's a reason Ford brought him up, and it was to give us something to theorize about until we learn more about the past, because there's no way that Arnold isn't important.