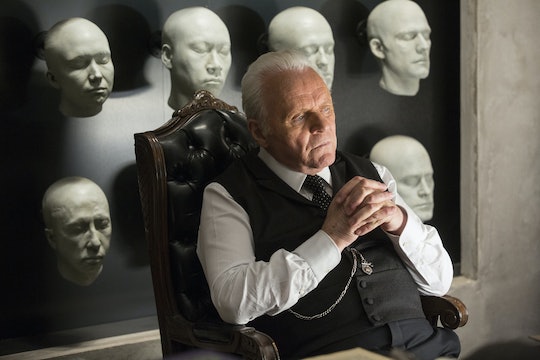 What Happened To Arnold On 'Westworld'? His Backstory Is Still A Big Mystery

For every answer that Westworld gives us, it raises about three more questions, and we're only a few episodes in. For example, what happened to Arnold on Westworld? As soon as he was introduced he raised a ton of questions. Why are the hosts calling out his name? How did he actually die? Is he dead at all? How does Ford really feel about his former partner?

Like most of the human characters on the show, Arnold hasn't yet been given much of a backstory. At least, not that we're aware of anyway. And yet, we know more about him than we do about almost anyone else. According to Dr. Ford, the two of them created the park and the hosts, though Arnold eventually became obsessed with the robots' consciousness. He aimed to make them self aware. Reportedly, by the end of his life, he went a little mad. He spent all of his time within Sweetwater and spoke only to the hosts. Eventually, he died in the park. It was called an accident, but Ford remarks that Arnold was "very, very careful," which certainly makes it seem like Arnold was driven to take his own life. The fact is, Ford is not what you might call a reliable narrator, so we really don't know what happened to Arnold.

Some fans believe that Arnold is actually the Man in Black (played by Ed Harris), while others think that he was reincarnated, in a sense, in the form of Bernard (in this theory, Bernard is an android). And as Reddit user imjustapoorboi points out, it could also eventually be revealed that Bernard is Arnold's clone. All of these are far-fetched, but equally possible. This is Westworld, after all, and it doesn't look like there's any plot lines that would be too outlandish for this place.

Personally, I wonder if Arnold is more deeply connected to this "maze" that the Man in Black is so obsessed with. He finds the image of the maze imprinted on the scalp of a robot, and the little girl tells him that the maze is "not meant for you." This, of course, means that it was "meant" for something or someone, meaning it had a specific, purposeful creator, potentially meaning Arnold (or Ford). Perhaps Arnold did create the maze for some purpose. And maybe, in the end, that is what killed him.