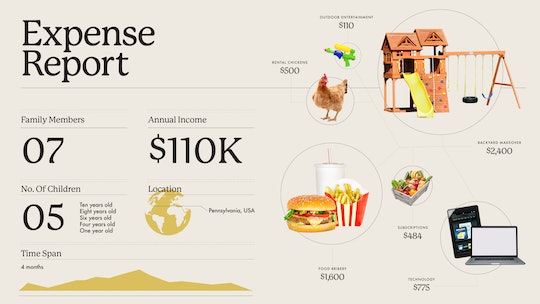 Kathryn and her husband are both full-time working parents. When the pandemic hit in mid-March 2020, she was faced with transitioning her position as a special education teacher to home while managing five children of her own. Her husband, a diesel mechanic for a large commercial fleet, was considered essential and was gone all day. “He is part of keeping the supply chain moving,” she explains. In order to succeed, they threw some money into entertainment. Kathryn has no regrets.

Partly for entertainment, and partly for distance learning, the family had to purchase a laptop, several new Kindle Fires, and two new Ipods. Having enough devices for everyone to do school at once was essential as Kathryn is also still teaching. She knows it is a privilege that each of her kids can have a way to access online learning, as many families are sharing or struggling without internet access.

Having enough devices for everyone to play Roblox at the same time was perhaps just as essential. “I’ve spent $180 on Robux since the pandemic started. I now pay them their weekly chore allowance in Robux.”

Desperate to entertain her existing brood, Kathryn decided that another brood might be both educational and fun. Plus, the egg production would save money to offset the backyard makeover.

Knowing how things can go with kids, though, the season mom decided to rent chickens instead of buying them. “I know that good ideas often end up being awful ideas, and now I can return them and not feel guilty at all.”

Her kids were overjoyed when the chickens arrived, but now do not want to do any of their care. The dog tries to eat them daily, and almost succeeded once. They poop more than expected, and a raccoon attacks their coop nightly. “Worst. Idea. Ever,” laments Kathryn. She found out there is no refund for returning the chickens early, and they haven’t been as productive as one might have hoped.

“Only one of them lays eggs. We get one egg every two days.”

The family signed up for Raddish, which is a monthly box of food and culture items from around the world. Sounds educational, but at $132 a year her kids lost interest quickly. At least Kathryn can snack on the homemade sushi her kids made her this month. Except she actually has to make it, because they don’t want to.

She got a lot of bang for her buck with a kids’ magazine subscription, Kindle Unlimited accounts, access to the online math game Prodigy, and ABCMouse. These things kept her kids busy, reading, and learning during the times she couldn’t be fully present with them. “They’ve been amazing additions,” she says.

Kathryn also spent $145 on a new set of books that her children really wanted, and with libraries closed early in the pandemic (and now only offering curbside pickup) it was a good choice for her family.

The family’s food budget has gone up about $100 a week during the pandemic, due to things like grocery delivery surcharges and tipping, but also due to trying to bribe and entertain her kids: “We have just allowed more kids meals and eating out since the pandemic began.” Ice cream or a sack of fried deliciousness have become more commonplace to break up the monotony of cooking for seven people for months on end. Sometimes a run through the drive-through is Kathryn’s sanity saver after a long day.

Despite living in an urban area with many parks, the family found them covered in caution tape and closed to play during the COVID-19 pandemic. Five children bursting with energy required a creative solution. Kathryn decided that a big swing set would solve the issue. The play set itself cost $1200, but additional cost came from the need to level the area first. Of course, as all home projects go, the leveling was not as simple as they expected, and their new play set sits boxed waiting for a nice spot to sit on. She shopped around for a set that could accommodate four swings so that no one can fight (preview: they will fight anyways).

This wasn’t an easy task. “I tried to get my husband to DIY one I found on Pinterest, and got a hell no.”

Her children hope the new playset will leave its boxes in the next two weeks, but their backyard has still gotten plenty of use regardless, due to their next pandemic purchase.

Making use of their yard amidst the chicken poop and disassembled swing set required some creativity, so Kathryn spent some change on bubbles, a sandbox, water guns, and sprinklers. Being outside is a must most days. Even before the pandemic, the family was planning some indoor construction- resulting in all five children sleeping in one room while more bedrooms are added in an attic space. The chaos of remodeling while crisis schooling and teaching her own classroom has Kathryn throwing her hands up in surrender. “I am cry-laughing, honestly.”

More Like This
How Do I Rediscover My Sexuality When I’m Completely Touched Out?
Can The Baby Have That?
How Title IX Changed The World For Girls
How To Wash A Mattress Cover