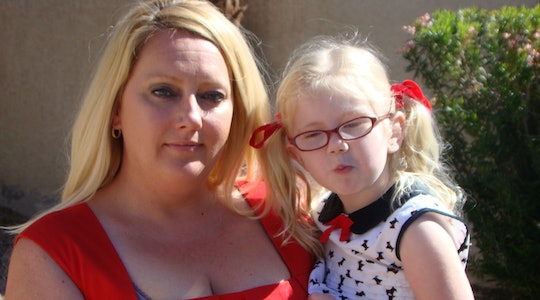 There's been plenty of backlash against Hillary Clinton's presidential campaign for its use of feminism as a tool to try and pressure women to vote for her. As a feminist, it's heartbreaking to see this huge divide created between women. As a mother, it's a major step backward, because I know electing Hillary Clinton would be a win for women everywhere. A vote for Hillary Clinton is a vote for my daughter and all daughters, because a Clinton presidency means something much different for women than a Bernie Sanders presidency.

First, let's be clear. There is absolutely, positively, unequivocally nothing anti-woman or anti-feminist about a vote for Sanders. Nada. But a vote for Clinton is, in no uncertain terms, an audacious act of feminism and would do everything to help tip the scales closer into balance when it comes to power, influence, and gender politics. Which is why I'm voting for Hillary, because I truly believe it's a vote for my 5-year-old baby girl and her future.

Hillary has, for decades, been the woman on the front lines of pushing for actual change in the way women see themselves, and are seen, at the very highest levels of government and power. She dared to be a feminist before Beyoncé was even born. She graduated from Yale Law School in 1973 — a novelty at a time when women's roles were still so narrowly defined — and she's been plugging her way up the ladder toward the White House ever since. And, because of all those things, she deserves respect — at the very least.

That's despite having just about every insult and road block imaginable thrown at her. Not just from her political adversaries. Her very presence at the big boy's table, even back during her husband's presidency, just fundamentally offends some people. I hear it all the time when I ask people why they have such a visceral hatred of Hillary. Most often, they'll spit out words like "Benghazi" and "Lewinsky" without any actual train of thought to follow. I truly believe the fact that she dares to be a woman and reach so high just rubs people the wrong way. And in response, she just dusts off her shoulder, puts her head down and fights on. Even today, Clinton puts herself directly in the line of fire and takes everything haters can hurl at her with dignity. That's what feminism looks like, people, and it's something that Sanders has never contended with and won't contend with.

It really started during Bill Clinton's campaign in 1991, when he started referring to his wife's smarts and experience as an asset to the country by saying voters would get "two for the price of one" meaning Clinton was every bit the leader he was. It didn't go over well and pundits and voters quickly reminded him that her job was to be the First Lady, and even though there's no Constitutional role for the spouse of the president, tradition dictated that she take on no more than a token charitable cause or issue — certainly nothing meaningful or weighty. And so she nodded, smiled and hanged tough, biding her time until she would be allowed to contribute in a meaningful way.

When Bill put Clinton in charge of healthcare reform during his first term in office, pearls were clutched and those men in those smoke filled rooms choked on their cigars, all joining in on the chorus of "Who does she think she is?" It was galling that a woman thought she could take on the insurance and pharmeceutical industries and push through the biggest piece of legislation since the New Deal. It turned out to be a total disaster. The legislation stalled and her detractors felt vindicated. Maybe after this embarrassment she would stick to redecorating the White House residence and leave the legislation to the men.

After her husband left office, it seemed ridiculous that she would become a New York Senator. But she was elected and became known as a well-repected advocate for her constituents. Again, not without plenty of criticism, but that's what a lady trying to kick in doors to one of the oldest and most fiercely protected "Good 'ol Boys" clubs in the world has to expect. And, she handled it all without ever seeming to break a sweat.

Then, she launched her own bid for the White House, and lost in a brutal and humiliating fashion. But she picked herself up, dusted herself off, and took on the job of Secretary of State. And, despite the Benghazi mess, which after 11 hours of brutal questioning seemed to amount to little more than an attempt to tarnish Clinton's reputation, her time at the State Department was deemed a wild success by her boss, and former opponent, President Barack Obama.

And now she's back and after all the Lewinsky, Benghazi, Whitewater and whatever other setbacks she's pushed through, there she stands, shoulders back, armed with decades of hard-won experience and perspective, asking for women to take her side. Asking for women to see all the snorts and sneers that she's weathered for what they were: collateral damage for wielding the hammer and trying to, once and for all, smash that ultimate glass ceiling — the one keeping a woman out of the White House.

This latest round of feminist backlash really is all about perspective. When former Secretary of State Madeline Albright gave her famous quote at that New Hampshire rally about a "special place in hell for women who don't support other women" it sounded like an ominous warning. But it was more a call to arms.

When Albright first used that quote, it was in response to a question from a reporter in an interview when she was asked to criticize the job then-Secretary of State Condeleeza Rice was doing. And, although there was certainly plenty Albright could have said, instead, she smiled slowly and used that quote as her response. Women trying to move up don't just need our support — they deserve our respect because they're working to improve every woman's prospects whether women realize or not.

Younger ladies might not remember what it has taken for women to have the rights they do today, from abortion and birth control to their own checking accounts and family medical leave. And it's taken women like Clinton, Albright, Rice and countless others all putting their shoulder down and pushing together to make that progress. And even today, more than 40 years after Roe v. Wade, those rights are under attack. People need a president who takes these issues personally and will protect them with everything she's got.

That's why it's so important that I walk into my polling place this November and proudly vote for the first woman president in U.S. history, and that my daughter sees me do it. I just can't allow all those years of sexist attacks to stop Clinton. Yes, she's a terrible campaigner and retail politican and I'm the first to admit she's made some mistakes. I, too, received one of those #I'mNotKidding fundraising emails and it made me cringe.

But Clinton is brilliant and has a record she's fought like hell to earn. Clinton has been waging a revolution on behalf of me and my daughter for years. So, I won't leave her hanging or let those who told her to get back in her "place" in line win. Not this time. And when Clinton puts a manicured hand on that Bible to take the Oath of Office, all women will have won a real victory. Because, going forward, all women will be able to metaphorically stand on Clinton's pantsuit shoulder pads and achieve greater things. My baby included.