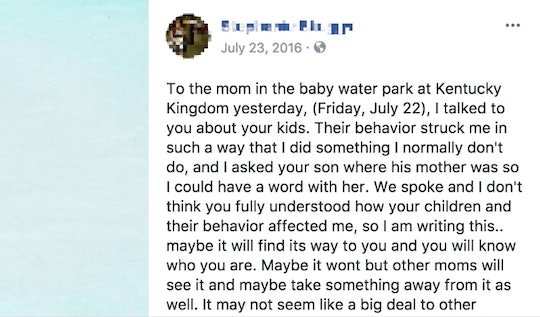 There’s a revolution brewing. Actually, it’s been brewing a long time, but the non-autistic world — well, we weren't paying attention. And then, thanks to Twitter, for a moment we were. The ~radical~ idea that parents are not necessarily the best advocates for Autistic children was given a push by an inflammatory book that came out this past summer. In case you missed it, here’s what happened: Judith Newman published a memoir about her autistic son called To Siri With Love, in which she said she’d seek power of attorney over her bright, affectionate, transit-system-loving son when he turned 18, to force him to have a vasectomy. For good measure, she also insulted a few autistic self-advocates. Nevertheless, the book became a bestseller, celebrities applauded it, and the non-autistic world generally received To Siri like it was the best thing since sliced bread.

Advocating for a ‘cure’ is nothing but harmful for those children — can you imagine growing up with a parent that dedicates their life to the idea that you’re ‘broken?'

But Autistic Twitter boiled over with rage. Their message? Judith Newman is on the wrong side of history. Autistic adults are tired of hurtful stereotypes depicting them as robotic and inhuman — and they're sick of having their voices ignored. Autistic people don’t want to be called broken, and they’re tired of non-autistic parent advocacy that demonizes “autism” and wails for a “cure.”

For too long, non-profit organizations primarily staffed by non-autistic family members have focused on the horrors of a so-called “disease.” In the infamous 2011 film Autism Every Day, produced by Autism Speaks, a mother declared she sometimes contemplates murder-suicide — in full hearing of her autistic daughter. (A version of the film was accepted to Sundance.) In 2016, the horrible "I Am Autism" commercial, apparently narrated by Autism itself ("If you're happily married, I'll ensure that your marriage fails"), shocked the autistic community, which saw it as callous, uninformed fear-mongering.

The bottom line is this: when parents charge into the night to demonize a kind of difference they don’t understand, their kids suffer for it. Autistic adults want parents to listen, and to re-consider how they'll advocate for the next generation of neuro-divergent kids.

“Advocating for their kids is great, but before any advocating can happen, [parents] need to make an effort to understand and appreciate their kid for who they are,” explains self-advocate and cookbook author Marie Porter in our email interview. “Advocating for a ‘cure’ is nothing but harmful for those children — can you imagine growing up with a parent that dedicates their life to the idea that you’re ‘broken?'”

Behind all this is the assumption that Autistic kids will never grow up to lead meaningful lives. But if parents listen to the innumerable thriving autistic adults in this world, they’ll realize that’s simply not true. Instead of adopting Newman's fatalistic outlook — she can’t imagine anything good coming to her 14-year old son, Gus — parents should look in another direction. According to Porter, “The real goal should be to advocate for change in society, so their kid can thrive.”

Sure, parenting someone who sees the world through a different lens is challenging, even painful. But when parents take to the internet (or major publishing houses) to publicize the intimate details of their children’s lives, they risk holding themselves up as martyrs at the expense of their children's privacy.

John Elder Robison, an author, self-advocate, and scholar-in-residence at William and Mary, speaks to the phenomenon of Warrior Mom blogs, in which mothers often portray themselves as heroes in light of their children's disabilities. (You can read more about them on The Establishment.)

“When kids are little, they don’t have any say,” Robison says. “But later, the idea that their mother posted stories about their smearing poo on the walls or whatever else they may have done, that’s really disturbing to the 16-year-old kid who was the subject of the mommy blog 10 years back."

Those moms, Robison feels, learned a hard lesson, and many such blogs have since been taken down. Five years from now, Robison suspects Newman herself may regret To Siri With Love.

Despite media portrayals of neuro-divergent people as dangerous and unfeeling, the truth is that autistic people are disproportionately the victims, not the perpetrators, of violence.

Shain Neumeier, self-advocate and civil rights attorney, tells Romper that technology has changed the landscape. It's so much easier for Autistic people to be heard than it was in 2006, before the explosion of Twitter. However, increased visibility makes Neumeier both hopeful and nervous.

"I’m torn as to how much visibility I want, because once you start having a lot of visibility, you have a lot of people attacking you," Neumeier tells Romper. Despite media portrayals of neuro-divergent people as dangerous and unfeeling, the truth is that Autistic people are disproportionately the victims, not the perpetrators, of violence.

In light of the dangers, parents should focus their attention on teaching children to advocate for themselves and their boundaries.

"The goal shouldn’t be, follow directions, comply, and be obedient," explains activist Lydia X. Z. Brown, editor of All The Weight Of Our Dreams, the first-ever compendium of writing by Autistic people of color. "The goal needs to be, you’re in charge of your body and your life." Brown notes that support can still exist, but that they should be of a child's own choosing.

Yes, kids will make mistakes, but that's true for Autistic and non-autistic children alike. Treating your neuro-divergent child the same way you treat their non-autistic sibling — to Brown, that’s good parent advocacy, too.

As a parent, it’s tempting to believe that you’re the world’s greatest expert in your child. But a little humility goes a long way.

Non-autistic allies have a powerful role to play. Their first task is to accept their children for who they are. Then, they should advocate for safe, inclusive communities, in which their child can grow.

As a mother who is both Black and Autistic, Morénike Giwa-Onaiwu, who serves on the Executive Board of Directors of the Autistic Self-Advocacy Network (ASAN), stresses the importance of listening to those who understand best.

"Nothing can replicate lived experience, nothing," she writes in an email to me.

Nevertheless, Giwa-Onaiwu feels strongly that non-autistic allies have a powerful role to play. Their first task, she tells me, is to accept their children for who they are. Then, they should advocate for safe, inclusive communities, in which their child can grow.

For parents, that means facing up to intolerance in your neighborhood, your school, and even within your own home. In our ableist culture, that's no walk in the park. When Giwa-Onaiwu encounters set-backs, thoughts of her children motivate her to keep on:

"I look at them and know that they are worth more than this world is giving to them and people like them, people like us."

More Like This
What I Want To Tell My Kids About Anxiety When The World Feels Unsafe
Celebrate Your Kid With These Cool Preschool Graduation Gifts
12 Genius Floats With Canopies (& Cupholders), So You Never Have To Leave The Pool
23 Children's Books For Your Dino-Loving Kid