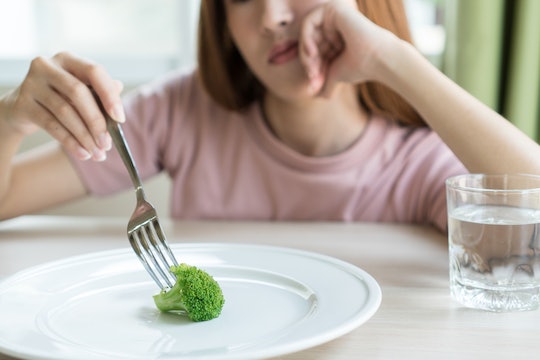 According To Experts, Eating Disorders Can Start Much Earlier Than You Think

Since this week is National Eating Disorder Awareness (NEDA) Week, here are some numbers for you to mull over: a little over every hour, at least one person dies as a direct result from an eating disorder, according to the National Association of Anorexia Nervosa And Associated Disorders (ANAD), and at least 30 million people suffer from an eating disorder in the United States alone, spanning people of all ages and genders. These are some scary numbers, and even scarier if you have a child. Which is why it's so important to know what age eating disorders begin so you can monitor if your kid's behavior is more than just picky eating.

National Eating Disorders Awareness Week is Feb. 25 through March 3, and this year’s theme is Come As You Are, which highlights NEDA’s “movement toward inclusivity in the greater eating disorder community.” The organization is trying to highlight that eating disorders don’t only affect thin, white women, but can affect anyone. And that unfortunately includes young children of all genders and races. CEO of NEDA Claire Mysko tells Romper in an email interview that concerns about body image can start as early as elementary school. Ugh. “According to NEDA, girls start to express concern about their weight and shape by age 6. An estimated 40 to 60 percent of elementary school girls are concerned about their weight or becoming too fat. The stats increase for teens. More than 62 percent of teenage girls and 28 percent of teenage boys are trying to lose weight,” she says.

Knowing the signs of an eating disorder are so important and crucial to making sure you can get your child the help they need. Dr. Mayra Mendez, a licensed psychotherapist and program coordinator for intellectual and developmental disabilities and mental health services at Providence Saint John's Child and Family Development Center in Santa Monica, California, tells Romper that there are both emotional and physical signs of an eating disorder to look out for in your children. She says weight loss, a lot of fine hair growing on your kid’s skin, weight not matching up with growth, hair thinning, and either a delay in having a period or not having one at all are some signs to look out for.

"Pretending to eat, skipping meals, throwing away food, or making frequent trips to the bathroom," are also physical and behavioral symptoms to look out for, according to Mysko. And as far as emotional signs go, she says it’s important to keep in mind that most people who have an eating disorder also have other conditions, “like depression, anxiety, or Obsessive Compulsive Disorder.”

Why does this happen in some children and tweens and not others? According to Mysko, “The best-known environmental contributor to the development of eating disorders is the idealization of thinness. The media has a role in that, but we also have to look at the way we teach our kids about food and health.” Mysko also mentioned the LIVE Well Act, which would amend the USDA’s nutrition programs to shift away from focusing on weight, but focusing on what children can do for their health in the long term, “like checking for high blood pressure or cholesterol and addressing mental health issues."

Mendez says parents are also significant influences of eating disorder problems. "When parents focus excessively on body image and judge themselves and their children by how they look, how much they weigh, or the size they wear, then parents are promoting body image conflicts and a stressful and aversive relationship with food and eating. When the focus of success is on size and looks, an unhealthy relationship with food tends to evolve.” But the family can also be a positive influence on eating disorders, according to Mendez. “Family-based intervention is very helpful to support positive interactions and education about healthy relationship with eating and food."

If your kid is a picky eater now, does that mean that they’re at a higher risk of developing an eating disorder down the line? Mysko tells Romper, “Picky eating is fairly common in early childhood, but if you are noticing that your child has a strong and prolonged aversion to certain foods, talk to your pediatrician. There is an eating disorder called ARFID (avoidant restrictive food intake disorder), which presents as extreme picky eating.”

As far as what you can do to help your child and maybe even prevent problems with food down the line, Mysko says, “The best way parents can help their kids is to be supportive. Talk about food and body image in a more holistic way. Ask your kids what makes them feel good or what gives them strength, rather than lumping foods into categories like ‘good’ or ‘bad.’ It’s also important to help kids be more media literate. Talk to to them about how the ‘perfect’ images we see in media are altered. Discuss the lack of diverse body types and be mindful about the way you talk about your own body in front of children."

Since body image issues can start as early as elementary school, it’s crucial to remember your role as a parent when it comes to healthy body image. Your kids are watching and imitating you more than you know. If you’re constantly looking in the mirror in front of them and saying how fat you are and pinching skin, or obsessing over your weight in front of them, there’s a pretty good chance they’ll internalize that. Be the example you want to see in your daughters and sons about positive body image.

But if you suspect an eating disorder, don't think it can be solved with a family dinner and a good talk. “Ultimately, combating an eating disorder requires professional help," Mysko says. "Our helpline is open Monday through Friday, and we also have a screening tool that can determine whether you have an eating disorder.”

If you or someone you know is struggling with an eating disorder, the ANAD also has a hotline. Call 630-577-1330. You can also find additional hotlines for helping someone you love on bulimia.com’s website, where they also offer a list of resources.