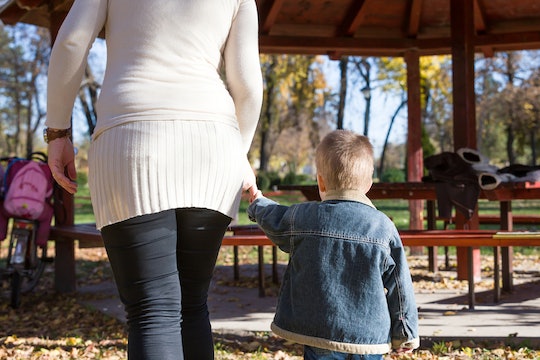 Every Sunday, I take my 5-year-old son to my gym so we can workout together. There's so much to do, and we can easily spend the whole day there. Because it's always just us two, he accompanies me into the women's locker room where I can help him put on his bathing suit and other things. But he's getting close to an age where he might not want to come into the women's room anymore. As a single mom to a boy, I recently started asking myself, what age should a boy use the men's bathroom? Because it's kind of a complicated issue. Luckily, experts have an idea, so I spoke with New York psychotherapist and family therapist Dr. Kathryn Smerling, and Licensed Clinical Social Worker and family therapist Marina Lenderman.

The men's room scenario is something I've never really had to think about until recently — my son has been coming into the women's room with me his whole life. If he has to go, we find the ladies room, mainly because he's still not tall enough to reach the soap in most public bathrooms. If I have to go... well, I'm a single mom and it's usually just us two, so I can't exactly leave him unattended in a public place right smack in the middle of New York City. So when is it time to start making that big transition? Because if I'm being honest, this milestone is one that scares me.

According to Dr. Smerling, if you have to put an age on it, 9 is probably the cutoff for boys to be allowed in the women's restroom. But Lenderman tells Romper in an email, "Once you notice that your son is able to use the bathroom on his own at home, school, or at a friend’s house, it may be time for him to use a public bathroom on his own." She adds that if your son expresses discomfort with the transition, you should discuss what may be holding him back in a "non-judgmental way". But it's one thing to allow your son to use a single person public restroom alone as opposed to restrooms that have multiple stalls or locker rooms with other men that he doesn't know. See? It's complicated.

Dr. Smerling offers some advice though, and says moms should "go through several practices with a male figure watching him. Wait outside and see how he feels about it. Make rules, boundaries - make sure he doesn't talk to anyone, no eye contact with strangers, etc." The more he practices, the more confident he'll feel when it's time to do the real thing. Lenderman adds to this by saying, "it’s useful to discuss what using the men’s locker room might entail, from the practical (keeping track of his stuff) to the personal (seeing other boys and/or men changing in the same space)." She adds that you can reassure your son that he's allowed to change his mind if he decides he's more comfortable using the women's bathroom or locker room with you.

I know — this transition can be really scary. Which is why it's a good idea to give him some rules and boundaries. But when he's ready, it's important to help him feel confident and prepare him as best you can for the transition. "Acknowledge that it is a big step he's undertaking in his independence," Lenderman says, and she suggests practicing other steps towards independence, "such as packing his own school bag, going to the bathroom independently, getting dressed on his own," and more. Just like with anything else, practice, set guidelines, and be supportive. We all want to raise independent, self-sustaining boys, and these milestones are what help our kids get there.