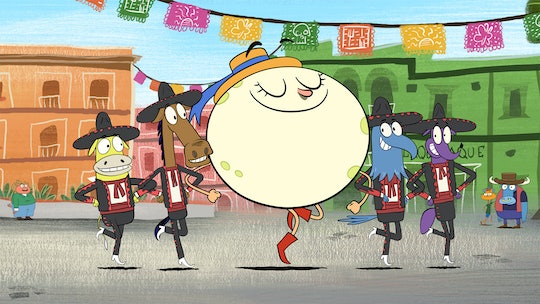 Kids Of All Ages Can Enjoy 'Let's Go Luna' On PBS

Unless a TV show or movie is extremely racy, I often hesitate to shelter my five-year-old too much. But when it comes to PBS’ newest educational cartoon, Let’s Go Luna, there’s no reason not to let any kid of any age watch and learn from the talking animals and moon character. Most parents are still going to wonder what ages should watch Let’s Go Luna though, and according to Judy Greer who voices Luna the moon, any age is appropriate. In a press release on PBS’ website, Greer said, "I’m thrilled to be part of such an impactful and imaginative show that will delight everyone from age 2 to 100!" and to be honest, that seems like an accurate age range.

If you don't mind your 1-year-old watching TV (I never did, because who actually turns their TV off during the day? Who?), then there might be no better early toddler programming than a cartoon that teaches kids about different cultures around the world. The episodes are just a half hour long, which makes for quick and easy watching every time, and there’s a chance your toddler will also get up to move to different music they’re exposed to on the show. So it’s a win all around if Let’s Go Luna can also get your toddler ready for a nap each day. That might just be wishful thinking, but it really is an educational and entertaining show that kids of all ages can enjoy.

Common Sense Media says that, technically, the show is suitable for kids ages four and up, which likely just means that four-year-olds will start to take in the information a little better than younger toddlers. But Let’s Go Luna hits all the important marks on the rating website for its educational value, positive messages, and positive role models and representation. Common Sense Media also wrote that "themes of tolerance, respect, kindness, and friendship abound in this enjoyable show," so you can't get much more innocent and kid-friendly than that.

Surprisingly, Let’s Go Luna was created by Joe Murray, who’s also known for Rocko’s Modern Life. I do suspect a lot less hidden adult humor in this particular cartoon, though.

"Let’s Go Luna gives children a vibrant introduction to some of the most interesting aspects of life around the globe, helping them appreciate what may be the same, and what may be different, about people’s everyday lives," Linda Simensky, vice president of Children’s Programming at PBS, told Deadline. "The show combines the humor, detail and artistry for which Joe Murray is known with one of the core values of PBS Kids — to encourage children’s curiosity and invite them to learn more about the world."

Murray wrote on his blog that when creating Let’s Go Luna, his goal was to target kids ages 4-8, but that he wanted to make it enjoyable for older kids and adults too. Those who may have watched Rocko’s Modern Life back in the '90s will probably recognize some similar animation and general feel. Overall, the PBS series is educational for kids of all ages, even if it wasn't originally intended for those younger than four.

I doubt that toddlers under four years old will be scared or confused by Luna or her talking animal and insect friends as they travel the world and learn about different countries and cultures. Younger toddlers might not be able to process everything as easily as preschoolers can, but you really can't go wrong with PBS programming. As long as you think your kid will enjoy Let’s Go Luna, it’s totally up to you to decide if they should watch it. But there’s nothing sinister or remotely inappropriate about it.

More Like This
'Workin’ Moms' Season 7 Is Reportedly In The Works! Here’s Everything We Know
The Addams Family Is Not Exactly As Kid-Friendly As You Remember
The Little Vampire Is Just Scary Enough
Witchy Vibes, Salty Language, & More: What Parents Need To Know About Hocus Pocus 2