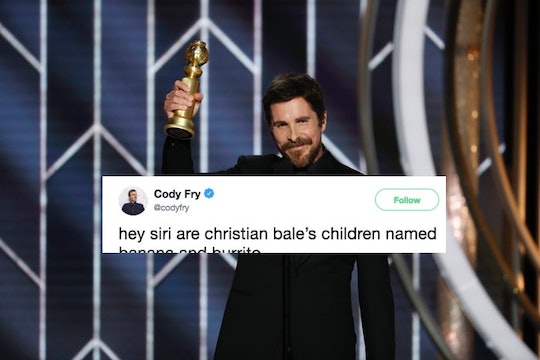 Christian Bale has a lot to be thankful for, and he made this very clear on Sunday night after winning the award for Best Actor in a Motion Picture Musical or Comedy at the 2019 Golden Globes. But his acceptance speech also left a lot of people feeling a bit confused after he referred to his kids with some peculiar names: Burrito and Banana. After that, it's only natural that people are wondering: What are Christian Bale's kids' names? Are they actually named Burrito and Banana Bale?

Although celebrities have named their children after fruits (I'm looking at you, Gwyneth Paltrow and Chris Martin) or syrups (did you know that Jason Bateman has a daughter named Maple?), Christian Bale is not one of these celebrities. Sure, Bale's accent was incredibly strong during his acceptance speech (and it wasn't fake), but people did not hear him incorrectly. In his acceptance speech, Bale did indeed thank his kids "Banana and Burrito."

During the speech, Bale looked at his wife, Sibi Blazic, in the audience and thanked her for everything, according to The Hollywood Reporter. "Thank you to my beautiful wife, who says less is more," Bale said. "Thank you for our beautiful children, Banana and Burrito."

But, those are not their names (sorry to disappoint). Bale's daughter and son's given names are actually Emmeline and Joseph, according to Us Weekly. But that's not to say he doesn't call them "Banana" and "Burrito" at home — and people on Twitter could not get over that.

It's incredible how many people had to Google what his kids names were after that speech (myself included) — and people took to Twitter to share this confusion.

Although some people would have probably loved for Bale's children to actually have those *unique* names, their names are pretty traditional. There are probably some people out there who didn't know that Bale even had kids — so here's the lowdown on them.

Bale is a father of two, according to the Daily Mail — 13-year-old daughter, Emeline, and 4-year-old son, Joseph — with Blazic, his wife of 18 years. But he is pretty private when it comes to his relationship with Blazic and his kids, and it's rare to see them all make appearances together.

Bale, according to Esquire, doesn't like being asked about his family in interviews and would rather talk about acting. But that doesn't mean he's never spoken about being a dad. In a 2010 interview with Esquire, for instance, he told the magazine that he could talk about being a father forever, saying:

I've got incredible pride for my family. I've absolutely fallen into that cliché of a dad who could just happily talk about my daughter endlessly. But it's not what I'm about in terms of being an actor. I don't want people to know about that.

And his acceptance speech proved that. While he has so much pride for his family and would even thank them in his speech, he isn't necessarily going to reveal so much about them. Bale doesn't even like to talk about his wife; he told Us Weekly in 2017 that she "likes to be very private."

While the the Bale family seems to treasure their privacy, the actor will give them a sweet shout-out from time to time. And I'm sure Banana and Burrito — I mean Emmeline and Joseph — treasures those moments as well.