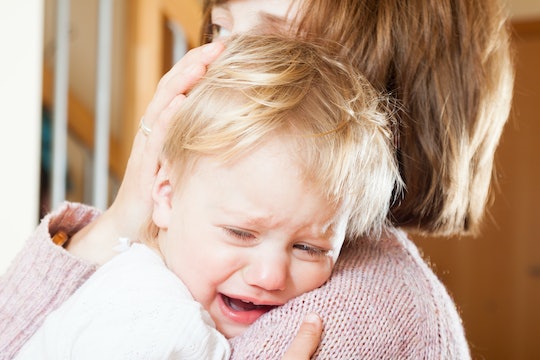 When I was a kid, it felt like all of my friends had something called "ear tubes" and I was the only one without them — not that I'm complaining about that, obviously. It also seemed like every kid in elementary school constantly had an ear infection at all points of the school year. Hence, the ear tube kids. But what are ear tubes exactly, and why is this common? What’s the procedure like and why do kids need to get them?

According to Dr. Candice Dye, assistant professor of pediatrics at the University of Alabama at Birmingham and Children’s of Alabama, ear tubes are small tubes that are placed in the ear to drain fluid. “They don’t stop infections but rather help symptoms as the fluid is allowed to drain," she tells Romper. Your kid will probably need ear tubes if they have a lot of ear infections or have "consistent fluid" floating around in there, according to Dye. They'll also be used if there is hearing loss or a concern for hearing loss, she says.

Dr. Murray Grossan, an ENT and author of Stressed? Anxiety? Your Cure Is In The Mirror, explains further, and says when your ears are blocked at the “eustachian tube,” it creates a vacuum, and the oxygen is absorbed, which is distressful. This vacuum created when your ears are blocked "stimulates the middle ear to secrete fluid to fill that vacuum," he says. This particular condition is called serous otitis media. “By placing tubes, the vacuum is relieved. The middle ear quits making mucus. In some cases, the blockage at the eustachian tube is also relieved," Grossan explains. He says to remember back to that game you played with your straw in your drink when you were a kid, the one where you covered the straw and withdrew it, and the liquid remained in the straw. "When you remove your finger, the liquid comes out," he says.

As far as why this happens, especially to children, Grossan says it’s mostly because your child’s frequent nasal discharge causes their adenoids to enlarge, and that blocks the eustachian opening. Dye says, “Children get ear infections and thus, many are referred to an ENT for evaluation for tube placement each year. According to one children’s hospital website, approximately one million children have tubes placed each year.”

How old does your child need to be before they can be considered for ear tubes? Grossan says he gave his son ear tubes when he was 6 months old, which “prevented him from having repeated problems the rest of his life.” Dye says, “The most common ages for tube placement is 1 to 3 years old. They have to be old enough to have had repeated enough infections to warrant tube placement, which is generally once they are closer to a year old.”

If your pediatrician or ENT recommends your child get ear tubes, the procedure is typically performed by an ENT and not a pediatrician. Dye says it’s a short, 15-minute procedure, and since it requires general anesthesia, it’s typically done in an operating room. Grossan adds, “It is very difficult to [perform the procedure on] a child outside of an operating room. With the child under anesthesia, you can carefully make the proper incision and make sure the tubes are placed correctly. As part of the procedure, you irrigate the middle ear to remove any thick mucus that may be way back in the mastoid cavity.”

It’s pretty common for kids to get ear tubes, so don’t worry if your pediatrician suggests seeing an ENT to discuss your options about getting them put in. Thankfully, after this short and minimally invasive procedure, your kid will stop having ear aches and they’ll have pain-free ears forever. And you can’t argue with that.