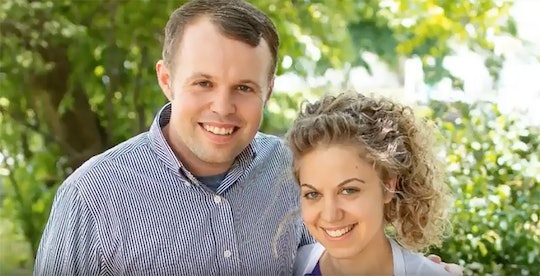 When John David Duggar announced his courtship to 26-year-old family friend Abbie Burnett in June, fans had a lot of questions about their romance. And one of the more especially pressing inquiries Counting On diehards have concerns Duggar and Burnett's dating guidelines. As some people already know, the Duggar family has strict views about what activities couples are allowed to engage in prior to marriage. So, what are John David Duggar and Abbie Burnett's courtship rules? These new pics of the duo enjoying a plane ride is very telling.

Shortly after Duggar and Burnett shared the exciting news of their relationship, they created a joint Instagram account. To fans' delight, the couple celebrated their first foray into social media with a cute photo and caption. "So, I reconsidered the whole "bachelor ‘til the rapture" thing," Duggar joked in reference to a comment he made on a past episode of Counting On, according to Instagram.

As for Duggar and Burnett's latest social media post, look no further than these two pics of the couple enjoying a plane ride. It appears that Duggar — who is a licensed pilot — wanted to give Burnett insight into his life off-camera. Duggar is a jack of all trades, after all, and it's understandable he wants to show off his many talents to Burnett.

"Exploring cloud nine :)," the couple captioned the sweet snaps, according to Instagram.

Of course, it didn't take long for fans to analyze Duggar and Burnett's body language in hopes of decoding their courtship rules. Some people noted Burnett's hand on Duggar's neck, and her head on his shoulder.

"Ooh check out that back of neck caress in the first pic (or at least that’s what it looks like)! I love it," one fan on Reddit penned.

"Aww this is cute .... Now I REALLY hope these two last and get married. They just behave like a 'normal' couple, well atleast as normal as a Duggar couple can get," someone else said. "Much more normal than all the other couples at courting stage."

I know what you mean, they just seem comfortable together and so it feels less forced. Like the hand on the back of his neck playing with his hair is just such a normal intimate part of dating that the duggars would make a negative and sexual thing when in reality it’s just comforting.

It's reasonable to argue that Duggar and Burnett's courtship rules are probably more lax in comparison to other Counting On relationships. Kendra Caldwell and Joseph Duggar limited their pre-marriage interactions to two side hugs a day, while Derick Dillard and Jill Duggar waited until after their engagement to hold hands, according to People.

Considering Duggar is 28 years old, it's not shocking he and Burnett are likely more generous with boundaries. Duggar is very independent as it is, and Burnett is employed as a nurse. Out of all of the Duggar courtships fans have ever witnessed, this one seems the most adult. It makes sense the two are redefining Michelle and Jim Bob Duggar's strict dating rules to suit their own personal needs.

Not to mention, Duggar is completely smitten with Burnett. “We fell in love very quickly," Duggar admitted in a home video featured on TLCme's website. "And it’s been a wonderful journey thus far and taking the next step to move onto a courtship.” Aw.

Don't take my word for gospel, but I wouldn't be surprised if Duggar holds off on proposing to Burnett so they can enjoy the dating stage of their relationship. Either way, it's clear the couple is content to do their own thing dating-wise, and it's pretty cool to watch.